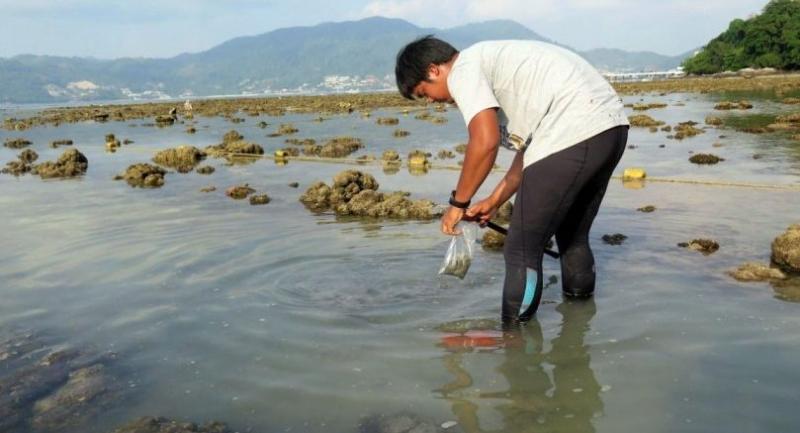 Phuket officials scramble to respond as ecosystem at iconic beach at risk.

Wastewater has leaked into the sea and polluted Patong Bay twice this month, harming the health of the reef ecosystem, which mostly comprises soft coral.

A team led by Phuket Governor Naraphat Plodthong inspected areas affected by contamination on Tuesday and pledged to solve the issue as soon as possible. The wastewater leakage was first noticed on February 6, as local people reported that the seawater had turned black, with fine sediment floating on the surface, and emanated a foul smell. Water pollution levels improved on February 13 and then worsened again on February 22.

Vipawee Dummee, a lecturer at the Faculty of Technology and Environment at Prince of Songkla University, said large areas of the soft coral reefs at Patong had been harmed as a result of prolonged exposure to pollution.

Many soft coral were bleached, suffering from necrosis and covered with sediment borne by the wastewater.

Vipawee said it was too early to estimate the damage, but added that the future of Patong Beach coral was at stake, because damage from water pollution already exceeded levels at which nature could heal itself.

Sediment covers almost the entire coral reef, which will not only kill the coral, but also encourage seaweed to grow, disrupting the entire ecosystem.

“Not only the existing coral is being damaged and may die, the sediment also prevents the spawning of new coral, as these months are the reproduction season of coral. Our greatest loss is the opportunity to

restore the reefs and no one can tell whether this is our final chance to bring back Patong Beach coral,” she said.

She said Patong Beach formerly had abundant coral reefs, but due to the rapid development of the tourism industry on the beach, pollution from the shore had degraded the reefs to a very poor condition.

However, due to a coral restoration project, which she has worked on in recent years, Patong reefs had been significantly restored and, before the recent damage, reef life such as clownfish could be found in the area.

Patong Municipality Mayor Chalermluck Kebsap said wastewater had leaked from the municipality’s wastewater treatment plant into the sea on February 6, because there was more sewage than the total capacity of the plant.

She added that wastewater and sediment from Pak Bang Canal, which passes through Patong City and empties into the sea at Patong Beach, contributed to the second pollution event, because the municipality had resolved the treatment plant problem after the first event.

“As we acknowledge the problem, we are trying to solve it by drawing on the emergency budget to dredge Pak Bang Canal to reduce sediment flowing into the sea, while we are rushing the phase-four expansion of our wastewater treatment plant to increase the capacity to treat sewage up to 30,000 cubic metres [per day] in order to solve the problem at its root,” she said.