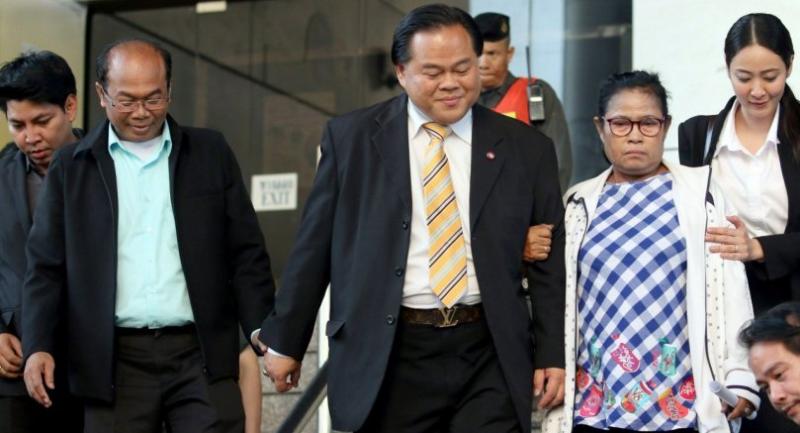 Professional body may punish Preecha after his arrest for alleged lies in Bt30m dispute.

THE TEACHERS Council of Thailand has launched an investigation against a teacher who allegedly filed a false complaint with police to claim Bt30-million lottery winnings from the legitimate owner.

The inquiry is targeting Preecha Kraikruan, a senior teacher at the Thepmongkol Rangsee School in Kanchanaburi province.

Arrested on Sunday, Preecha was released on bail yesterday. “We need to investigate to |determine whether he engaged in misbehaviour and ethical violations,” council secretary-general Somsak Donprasit said yesterday.

Preecha and his key witness Rattanaporn Supathip, a lottery vendor in Kanchanaburi, are facing four charges related to an alleged conspiracy to file a false complaint against retired Lieutenant Charoon Wimul to claim the lottery winnings. On November 2, Preecha lodged a complaint with police claiming that he had lost five lottery tickets with the winning number.

After finding out that Charoon had cashed the tickets, Preecha accused Charoon of illicitly taking the winning lottery tickets that he had bought from Rattanaporn. The teacher has been a regular customer of Rattanaporn for years. Both Preecha and Rattanaporn have been charged with filing a false complaint with police, giving false information to officials, framing another person in a criminal case, and supplying officials with false information that appeared on official documents for the purpose of damaging others.

The framing charge by itself can be punished by up to five years in jail, a fine of Bt100,000 or both.

Preecha and Rattanaporn, who have been released on Bt100,000 bail each, have denied any wrongdoing.

After walking out of the Criminal Court, Preecha told media that the winning lottery tickets were his.

Due to the lottery scandal, three local policemen and a court official testifying in favour of Preecha have already been transferred.

The transfers took place after the Central Investigation Bureau (CIB), acting on Charoon’s petition, took over the investigation into the high-profile dispute.

CIB chief Pol Lt-General Thitiraj Nhongharnpitak said yesterday that Preecha had appeared dazed and not made a confession. “It will take some time to interrogate him,” Thitiraj said.

He said the investigation would focus on Preecha and Rattanporn before expanding to cover local policemen accused of favouring Preecha.