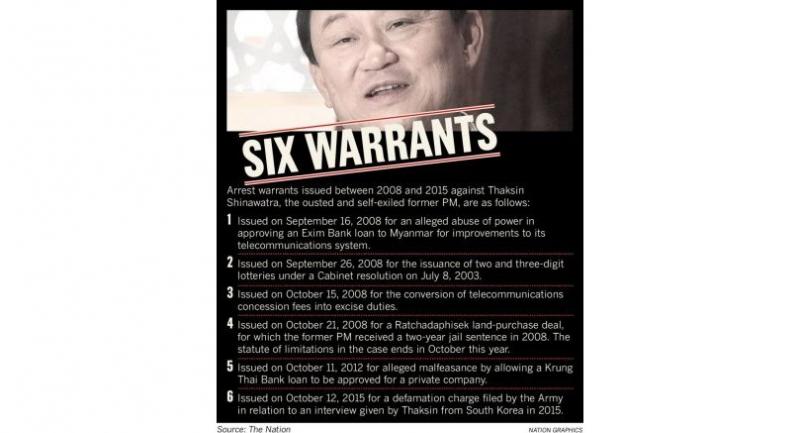 EXILED EX-PREMIER ACCUSED OF MULTIPLE ACCOUNTS OF CONFLICTS OF INTEREST

THAILAND’S TOP court yesterday issued an arrest warrant for fugitive former prime minister Thaksin Shinawatra relating to policy executed by his government that was deemed to benefit his family business.

The Supreme Court’s Criminal Division for Political Office Holders started its trial in the case under a new law on criminal procedures relating to cases against politicians. The new law allows trials in absentia against politicians that have been suspended because the defendants have fled the country.

Thaksin was sued by public prosecutors in 2008 on charges of malfeasance, dereliction of duty and violating the anti-corruption law. The case stemmed from his government’s decision to allow companies with telecoms concessions to pay excise tax instead of concession fees, which caused lost revenue of Bt66 billion to the relevant state agencies.

The Shinawatra family’s business at that time, Shin Corporation, was deemed to be one of the telecoms firms benefiting from the policy. Thaksin, 69, fled the country the same year and has since lived in self-imposed exile overseas. Under the old law, the legal cases against him were suspended pending his arrest but under the new law passed last year, the court is empowered to try cases in the absence of fugitive politicians three months after an arrest warrant is issued following their escape.

Under the new law, the defendants have the right to appoint lawyers to act on their behalf and they can get involved in defending themselves at any time during the trial.

However, neither Thaksin nor his lawyer was present at the court yesterday and he did not appoint anyone to act on his behalf, so only the prosecution was present in court.

Copies of the arrest warrant and the indictment had been posted at Thaksin’s house in the Charoen Sanitwong area of Bangkok, notifying him of the start of the trial yesterday.

The court issued an arrest warrant for Thaksin after no representatives from the defence appeared in court yesterday. The court also assigned public prosecutors to seek Thaksin’s arrest and to give monthly updates to the court on their progress.

The court concluded the hearing by instructing both sides to return on July 10 to examine the evidence and list of witnesses.

There are also three other cases against Thaksin that are being reviewed in his absence due to the new law. They involve alleged irregularities regarding a loan from the state-run Krungthai Bank to a property firm, a loan from the state-run Export-Import Bank to Myanmar and a Thaksin government project to offer state lottery bets similar to those of underground lottery schemes.

In their lawsuit filed against Thaksin, public prosecutors also accused him of acting in conflict of interest while serving as prime minister between 2001 and 2006, in addition to malfeasance and negligence.

The lawsuit noted Thaksin’s government exempted his satellite business from paying excise tax even though it was part of the telecoms sector. The exemption also benefited his family’s Shin Corp.