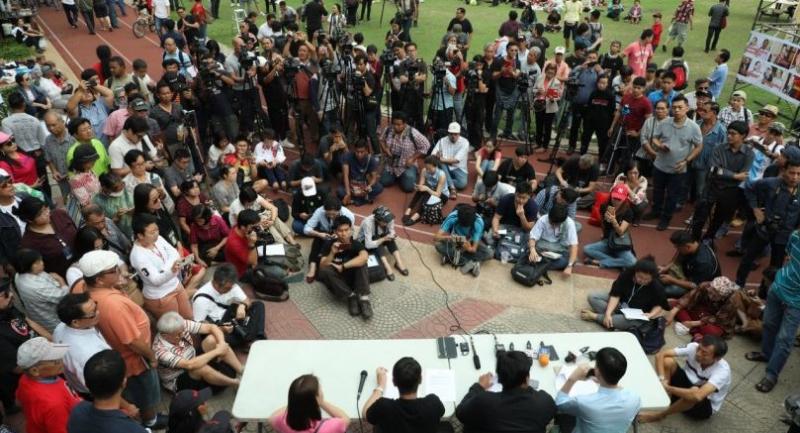 By KAS CHANWANPEN
THE SUNDAY NATION

A PRO-DEMOCRACY group has threatened to step up its demonstrations if the ruling junta fails to respond to its demands for the next election to be held this year.

The group yesterday also demanded that the National Council for Peace and Order (NCPO) be dissolved and their orders be nullified, with the coup-makers remaining as a caretaker government until the |election is completed.

The group leader, Rangsiman Rome, said yesterday that as the coup’s fourth-year anniversary is coming up in May, this should be the last year of the coup-installed regime.

In announcing the group’s demands, Rangsiman said the election must be held by the end of November. He had no faith in Prime Minister General Prayut Chan-o-cha’s promise that the poll would take place next February.

“We do not believe that the voting will happen next February, because Prayut has pledged several election dates but then the election has always been delayed,” the activist leader said. “Thailand does not want the military [governing] any longer.”

Sirawith Seritiwat, another leader of the pro-election group, said that Thailand could not go on with the NCPO in place.

“There is no guarantee that an election under NCPO rule would be free and fair,” he said. “The NCPO must leave office now. We only need a government, not the NCPO.” Sirawith emphasised that without freedom of expression, a free and fair election was not possible. He reiterated that the NCPO must be dissolved, along with all its orders, for the country to move towards a true election.

He said the offer was the best for the NCPO and society. If the coup-makers do not respond accordingly, protests calling for the election would turn to demonstrations demanding the ouster of the NCPO, he said.

“Everything is possible if the NCPO will accept the offer,” the activist said. “Unless the NCPO accepts it, nothing will work. And we will have to oust the NCPO.”

The press conference was held yesterday at Thammasat University’s Tha Prachan campus during a political assembly calling for the election.

About 200 people participated in the assembly, most of whom were middle-aged.

It was the second rally held in a series of pro-election activities planned in the lead-up to the coup’s fourth anniversary on May 22.

The series of protests are a response to the latest election delay, caused by the MP election bill. The Constitution, put into effect in April last year, states that the election shall be held within 150 days after all four essential organic laws are in effect.

The National Legislative Assembly, however, revised the MP election bill so that it would take effect three months after its promulgation.

The stipulation enraged the public, as it would delay the election into 2019.