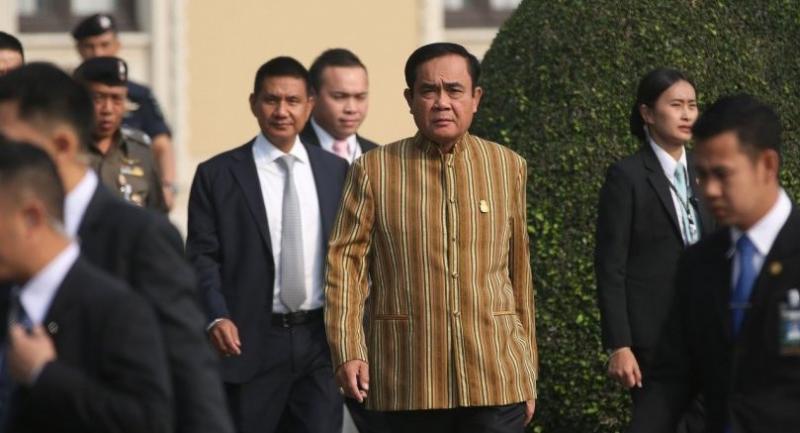 PRIME MINISTER General Prayut Chan-o-cha yesterday gave his assurance that the chief charter drafter’s proposal to have the Constitutional Court interpret two organic bills essential to hold the election should not cause any further delay to the poll timeline.

Chief charter drafter Meechai Ruchuphan suggested that the bills on the election of MPs and Senate selection, approved by the National Legislative Assembly (NLA) last week, might contain some points conflicting with the 2017 constitution which, if enacted, could cause further legal complications.

Among those is the way in which future senators would be selected. The NLA changed the stipulation that candidates be independent to allow for a mixture of independents and people proposed by organisations, a point that the Constitution Drafting Committee (CDC) thought might be deemed unconstitutional.

Agreeing with Meechai, Prayut said that these points should be made clear from the start and the court would finish its job in time for the promised election timeline to proceed.

“The election will be held by next February unless there are uncontrollable factors,” the premier said during his weekly press briefing. “Can I tell the court what to do?”

The election date has been shifted four times since the National Council for Peace and Order (NCPO) came to power after the military coup in 2014. Most of the delays have been blamed on “legal constraints” from legislative bodies appointed by the NCPO itself.

The election date is now set for February 2019, three months after the date of November this year promised by Prayut last year. The election delay has been caused by the NLA’s decision to delay enforcement of the organic law draft on the election of MPs by three months.

Chartchai Na Chiangmai, a CDC spokesman, said the petition process would not take long and the road map to the election should remain unaffected.

He said Meechai should have already submitted a letter of concern to the NLA regarding the bills and the NLA could lodge the petition with the Constitutional Court next week.

“I think that the court would take no longer than seven to 10 days to rule whether the bills are constitutional. It doesn’t take much time at all. The road map remains just the same,” he said.

Meechai agreed with Chartchai, saying the process would not affect the road map. But if the laws were left unclear, and were in use after the CDC had left office, any legal consequences from then would take the situation back to square one.

NLA President Pornpetch Wichitcholchai said he had decided to withdraw the bills he was expected to submit to the government today following the CDC’s proposal. However, it would be up to the NLA members whether they would petition the Constitution Court, and if that was the case, his personal view was that the election of MPs bill would cause a delay in the election.

Meanwhile, Prayut remained reluctant yesterday to say whether he would join or advise any political party, as speculation continued to swirl that the Palang Pracha Rath Party would invite him to be its adviser.

“They haven’t invited me yet. I don’t know how I will decide. There is still time for politics,” he said. “It depends on how people would like their country to be.”

Deputy Prime Minister Wissanu Krea-ngam also reiterated that Prayut was legally eligible to become a political party member but he said the premier would not be able to stand at the next general election, as the charter required Cabinet members to resign within 90 days of the constitution coming into effect last April.

Chuan Chujan, leader of the group, said he had not yet contacted Prayut or anyone in the government to join his party.

“I don’t want to put pressure on them. So, I don’t think I will invite them to join us. But if they’d like to, they are welcome,” he said.

Palang Pracha Rath group is reportedly a military party formed especially to support Prayut at the next election.

Chuan did not confirm or refute this. He just said that people of any occupation could be in politics.

“I don’t see anything bad about the military institution or General Prayut. If they are good and capable of improving this country, why would we have to repulse them?”