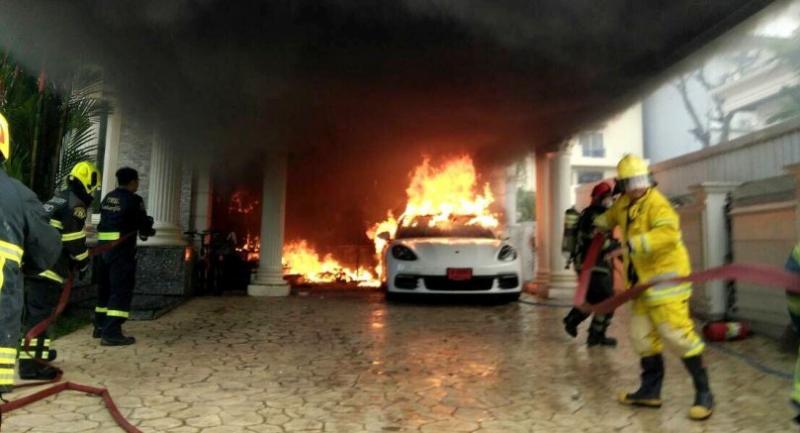 PLUG-IN hybrid electric vehicles (PHEV), which have been growing in popularity, suffered their latest high-profile casualty yesterday when a Bt10-million Porsche Panamera caught fire while recharging its battery in Bangkok’s Taling Chan district.

The fire also damaged the owner’s luxury home where the vehicle was being recharged overnight. AAS Auto Service Co, the authorised distributor of Porsche in Thailand, said the damaged car had not been purchased from the firm, but from an independent importer.

The firm said it was not sure if the buyer had been advised by the seller about how to properly install and use the charging system. The electrical cords, sockets and other equipment of the charging system of vehicles imported by independent firms may not match the specifications for use in Thailand, according to a company spokesperson. As the authorised distributor, the firm has engineers certified by Porsche of Germany to install the system and equipment for recharging the plug-in hybrid vehicles which are powered by both electricity and petrol, but they are required to be plugged in at home overnight to recharge the battery, he said.

Police and firefighters were summoned at 6.30am yesterday even as the luxury sports car was already engulfed in fire with the flames reaching the nearby living room of the house. Homeowner Natthawut Kritaya-ayanont said the drawing room and home-theatre system were badly damaged. The cost of repairs were estimated at Bt6 million.

He said his mother had bought the car last September. She had taken it out on Thursday evening for some errands and returned home at around 10pm.As per her routine, she plugged in the home battery-recharging kit and went to bed.

Natthawut said he heard an explosion at 6am when the family was still in bed. They rushed downstairs to find the car ablaze and the fire spreading.

Porsche encourages Panamera owners to frequently recharge the battery with the home kit because the car’s electronic components use a lot of power. The car was insured, Natthawut said.

“We still don’t know the details of the electrical system so it is difficult to pinpoint the exact cause,” he said.

However, Pattanadesh noted that if the vehicle had been purchased from the authorised importer – AAS Auto Service Co Ltd – they would have installed the charging box, which comes with a good level of safety systems. “Apart from the charging system in the car, we must also consider the home electrical system as well as the size of the cables,” he said, adding that in his home, the charging box was separate from the house’s main board.

“I also use a larger diameter cable just to be sure. I’ve never had any problems, even when I’ve left the charging cable connected for days.”

Pattanadesh said the fire could affect public confidence in new technology like PHEVs, but not for long.

“Thais respond to everything and this will be no different from news of smartphone batteries exploding. They’ll be scared for a while before everything returns to normal,” he said.