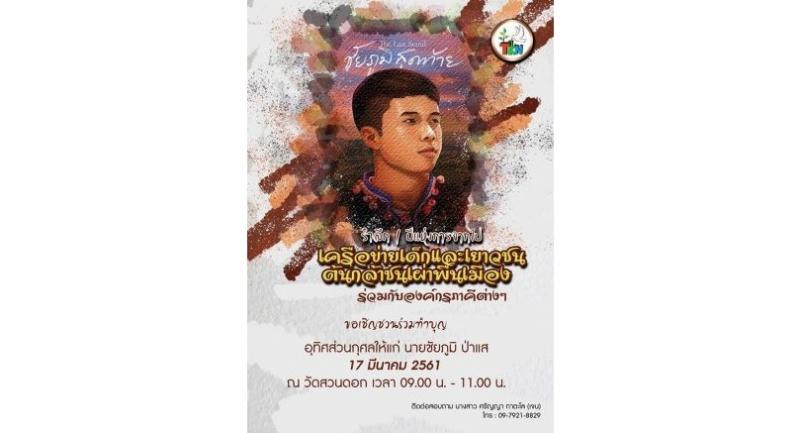 Friends and colleagues of Lahu activist Chaiyaphum Pasae gathered at a remembrance ceremony on the first anniversary of his death on Saturday morning.

Ethnic minority youth networks and allied agencies arranged the remembrance event and religious ceremony at Wat Suandok Temple in Chiang Mai for Chaiyaphum, who was extrajudicially killed by a military officer.

One of the organisers of the event, Saranya Katalo, said the event was attended not only by friends and colleagues of Chaiyaphum, but other people from Chiang Mai who did not personally know him but had heard about the nature of his death and wanted to make merit.

Saranya said the event was not only a religious ceremony, as some of the participants arranged a small campaign asking for justice for Chaiyaphum. He said there had been little progress in his case since the most important evidence – surveillance camera footage from the scene – had gone missing.

Chaiyaphum was a Lahu, an ethnic minority group in the North of Thailand. He was born as a stateless child and his age was estimated to be around 17 to 19 years old on the time of his death, as he did not have an official birth certificate.

He was well known for his movie-making skill and his active role in several campaigns for ethnic minorities’ rights and the social issues related to Lahu communities in Chiang Mai’s Chiang Dao district.

On March 17, 2017, Chaiyaphum and his friend were stopped at Ban Rin Luang military checkpoint in Chiang Dao District for inspection. He was later shot dead by a military officer, who claimed that 2,800 amphetamine pills were found in his car and that he had tried to fight the officers with a hand grenade.

However, according to earlier reports, many witnesses at the scene had told a different version of the story. They said they had seen Chaiyaphum beaten and then shot dead.