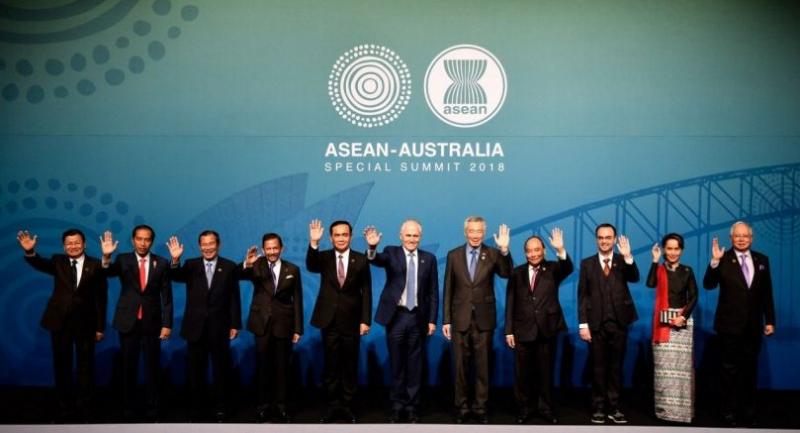 THE THAI and Australian prime ministers held a bilateral meeting for the first time in five years during the Asean-Australia special summit in Sydney, with focus on upgrading the economic relationship and regional security cooperation.

Thailand has also expressed support for closer economic and security cooperation between Asean and Australia, especially in areas of innovation and sustainable development in the Indo-Pacific region.

Thailand will also play an important role on this crucial matter when the country takes over the Asean chair next year, according to Deputy Government Spokesman Lt-General Weerachon Sukhondhapatipak.

He said Thailand and Australia will celebrate the 70th anniversary of their bilateral relations in 2022 when Thailand is also scheduled to be the chairman of the Asia Pacific Economic Cooperation (Apec).

As the last state visit by an Australian leader took place more than 20 years ago, Prayut issued an invitation for the Australian premier to visit Thailand, Weerachon said. He said Australia has also been very active in boosting its relations with Asean countries for mutual benefit in the Indo-Pacific region.

Weerachon said Australia also thanked Thailand for its support for the memorandum of understanding on regional cooperation to combat terrorism.

Meanwhile, Australia warned Asean leaders yesterday that the use of encrypted messaging apps to plan terrorist attacks is the greatest threat facing intelligence agencies in modern times, as they vowed closer cooperation to counter extremism, AFP reported. The Asean-Australia special summit in Sydney heard that use of the “dark web” was a spiralling problem and countries in the region must work together to keep on top of it.

Australia’s Home Affairs Minister Peter Dutton told the meeting “the use of encrypted messaging apps by terrorists and criminals is potentially the most significant degradation of intelligence capability in modern times”.

He said the only way to deal with the problem, and the increasing use of the Internet by groups like Islamic State to radicalise and recruit new members, was to work together. “We have to be constantly alert, constantly working with our neighbours in the region,” said Prime Minister Turnbull, pointing to the increasingly transnational nature of terrorism.

Malaysia's prime minister also warned his Southeast Asian neighbours that the Rohingya refugee crisis in Myanmar could become a serious security threat for the region.

Hundreds of thousands of the Muslim-minority Rohingya have fled Myanmar’s troubled Rakhine state after authorities launched a brutal crackdown on insurgents six months ago that the UN has called “ethnic cleansing”.

Myanmar has vehemently denied the allegations, insisting it was responding to attacks by Rohingya militants in late August.

Malaysian Prime Minister Najib Razak raised fears that so many desperate and displaced people could fall prey to extremist groups like Islamic State.

With Myanmar’s de-facto leader Aung San Suu Kyi sitting just metres away, Najib said in Sydney that it was no longer a domestic issue for Myanmar.