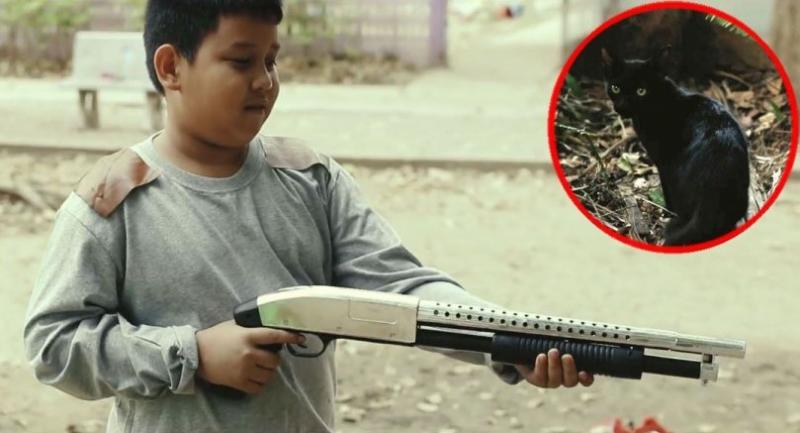 A video clip titled “Kru Krub, Ai Prem Ying Maew”, or “Teacher, Prem Has Shot a Cat”, was posted by Thanut Thangthanasup on Sunday, and since has been watched more than 1 million times and shared more than 25,100 times, drawing more than 20,000 comments.

Referring to a person with the modifier “Ai” in Thai is considered insulting.

The clip starts with a female headmaster at Ban Thunyai School punishing a female student for picking mushrooms and flowers. Then a boy rushes in and shouts: “Teacher, Ai Prem has shot a cat!”

The video then shows a flashback of the preceding incident with a businessman, depicted as a financial sponsor of the school, talking to the headmaster and thanking her for her support, which allowed him to win a construction project to build the main road to the school.

The construction contractor is accompanied by his son, Prem, so the headmaster orders schoolboy Wichian to take Prem on a tour of the school.

The boy playing Prem is chubby and wearing a T-shirt similar to that worn by Premchai when he was arrested.

In the real-life poaching case, Premchai was apprehended by Wichian Shinwong, chief of the Thung Yai Naresuan Wildlife Sanctuary, who has since gained nationwide acclaim for doing his job despite the suspect’s wealth and high social status.

In the clip, when Wichian shows Prem the “Honest Shop”, a self-service snack shop, Prem grabs candies and snacks without leaving any money in the jar.

Wichien reminds Prem that he has not paid for the snacks, but the other boy replies: “You don’t know how much I’ve paid for this school.”

Then Prem asks Wichian if he can play with his airgun. After Prem misses his target while shooting at cans, he says he needs a moving target and then shoots and kills the school’s black cat.

After Wichian tells the headmaster about the incident, she instead tries to punish Wichian for not collecting money from Prem for the snacks.

And when Wichian reminds the teacher again and again that Prem had killed the cat, his father tells the teacher that if she punishes his son, the school would face the consequences.

The movie ends in suspense as it remains unclear what the teacher will decide.

And the video is only the latest creative offering about a criminal case that has become a cultural phenomenon.

Musician Xumet Ong-art recently wrote “Sat Narok Haeng Thungyai”, in English translating as “Hell-bound Beast of Thung Yai”, about a wealthy hunter intent on taking as a trophy the black leopard of Thung Yai. The song relates that the man kills the animal and is arrested, but he is fearless because of his money and connections.

“Some beasts kill to survive, but some hell-bound beasts kill for pleasure,” reads one lyric.

In another case, TV host Ketusephsyswasdi “Na Nake” Palakavangsa Na Ayudhaya sang a parody of the pop song “Koisuru Fortune Cookie” by the Thai girl group BNK48 to condemn people involved in killing the leopard. Others have tweaked the lyrics of “Into The Woods” by Max Jenmana to criticise a cruel, wealthy man who kills wildlife.

Even the clergy have become involved. The famed Buddhist monk, Phra Maha Sompong Talaputto, joked during a talk on March 8 that when visitors encounter tigers in the forest, they should chant the mantra “Premchaya, Premcha Premchai” twice, which would send tigers running for safety. A video of the joke has attracted nearly 600,00 views.