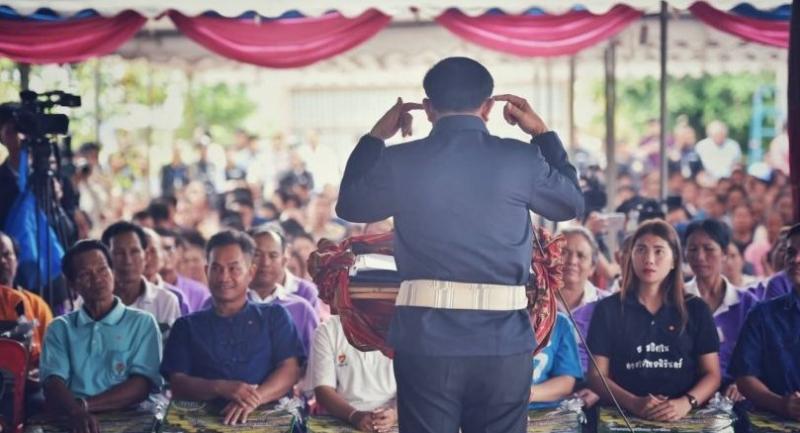 PRIME MINISTER General Prayut Chan-o-cha yesterday insisted the junta government was not using the much-hyped Thai Niyom Yangyuen scheme to campaign ahead of the next general election.

“This is not my campaign project, no,” Prayut said. “We have initiated processes periodically, visiting every village and looking at what local people want.”

Thai Niyom Yangyuen refers to the government’s “sustainability Thainess” campaign, which has seen the premier meeting people across the country.

Prayut was on a one-day visit trip to the northeastern Nong Bua Lamphu province, where he attended a community forum on the nationwide Bt100-billion sustainability project.

Initiated last month, the scheme has been hyped by the junta government, which ostensibly has less than a year in office before the next government is elected, according to Prayut’s most recent promise about the election timetable.

The scheme is viewed by critics as little more than a populist campaign to boost the government’s popularity, which has slumped after a series of corruption scandals, unsatisfying economic performance and the suppression of public political opinion.

Since the middle of last year, Prayut has also paid visits to local areas almost every other week, with the explanation that he wanted to keep in touch with local people and their livelihoods.

In almost every visit, Prayut has handed out land-use permits to villagers and approved multi-billion-baht projects for local administrators.

After repeatedly denying the visits had a political agneda, Prayut yesterday told Nong Bua Lamphu residents how his junta government could be a “model of democracy”.

“We need a government that visits every area and every province like this. A province with many problems should be taken care of a lot,” the premier said.

“How should Thai democracy be? Should it take care of everyone? MPs were often from many parties. If they belong to the government side, they would take care of their strongholds. The opposition side, meanwhile, is on the other hand,” he added. “How could we ensure, then, that everyone is treated evenly?”