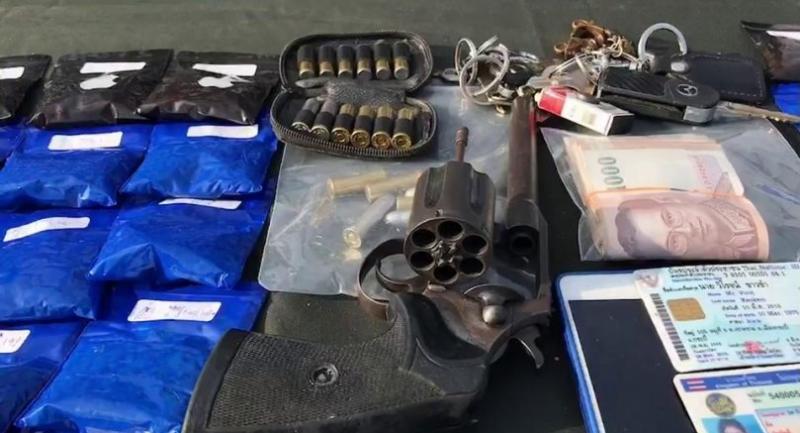 Krabi Police held a press conference Thursday to announce that two alleged drug mafia gang leaders had been arrested in Krabi with almost 20,000 amphetamine pills and Bt2 million worth of assets.

The accused dealers – 43-year-old Wirote “Bang Lai” Khaokham and 25-year-old Nantanat ‘Fa’ Ratchaniyom – were arrested with 19,200 amphetamine pills, a .38mm pistol, Bt50,000 in cash, a pickup truck, a car and a motorcycle. The men are Krabi residents. Leading up to Wirote’s arrest, police arrested numerous drug dealers allegedly working for his network. They told authorities that Wirote was the main supplier selling drugs to retail drug dealers in the local area. Police closely followed him until March 19 when they learned that Wirote had received a new stock of drugs and was preparing to distribute them to his local dealer network.

Police arrested him at his house.

Wirote told police that he bought the drugs from a man named “Jarae” and does not know his real name. They only contacted each other via mobile phones, he said. Police said Wirote claimed to purchase only 10 packages at a time from Jarae, at a cost of Bt1 million, and that he could make Bt2 million out of that.

Nantanat was later arrested when police let Wirote contact her to pick up a drug package placed on the Petchakasem roadside.

She was arrested at her home after picking up the box.