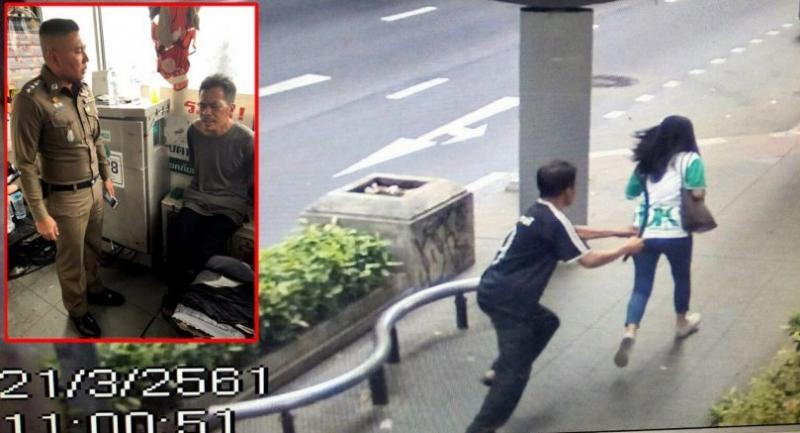 A man alleged to have attacked a young woman from behind just metres from the National Police headquarters in Pathumwan district confessed on Friday that he intentionally pretended to be mentally ill in order to avoid severe punishment if he was caught.

Police on Friday arrested the man identified as Katcharin Klaijam, a 39-year-old man from Phitsanulok, at Hua Lamphong train station.

He was seen in CCTV footage using a metal bar to attack the young woman on Wednesday.

The footage, uploaded by the woman’s mother to Facebook, showed the woman running for her life to the police HQ where an officer helped her. She suffered minor injuries to her arm and neck and has been discharged from hospital.

The woman’s mother, Noppawan Nantakit, said her daughter is a third-year student at Kasetsart University and there was no apparent motive for the attack.

In their initial questioning, police said that Katcharin appeared to be mentally ill and denied being involved in the attack. But under further interrogation, Katcharin, who was dismissed from his job as a guard at a university two days ago, admitted that he intend

ed to rob the victim to pay for a trip to his home in Nakhon Pathom province. But he got angry when the victim ran away and used the metal bar to beat her before escaping the crime scene, he said.

He said he pretended to be mentally ill because if he were caught he would get a more lenient sentence.

Police found no record of treatment for mental illness and later charged Katcharin with physical assault causing both physical and emotional harm.