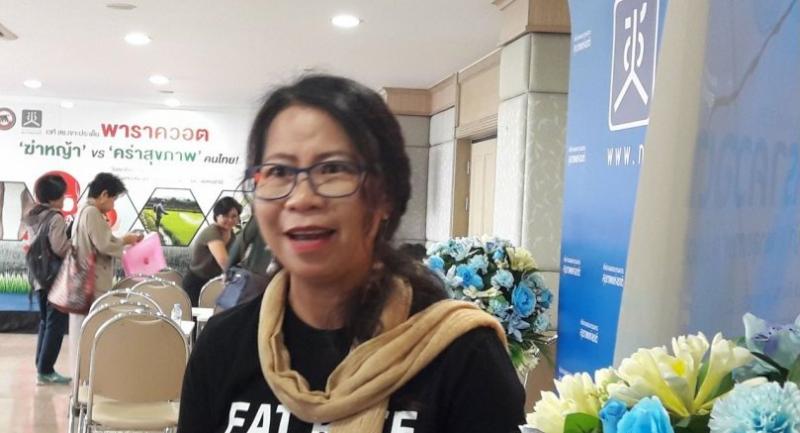 AN award-winning researcher, Assoc Professor Puangrat Kajitvichyanukul, has been caught up in a storm of protest for speaking out about a life-threatening chemical that farmers may have inadvertently spread in the environment.

The Federation of Farmers’ Safety has accused Puangrat’s research of causing damage and pressured her to resign from the state-owned Naresuan University before the end of this month.

“Show responsibility for the damages caused,” the federation has demanded.

Puangrat, the head of the Centre of Excellence on Environmental Research and Innovation at the university’s Faculty of Engineering, has recently disclosed alarming findings from a research project. The study showed that there are high concentrations of paraquat, a widely used herbicide that is harmful to humans, in some areas of Nong Bua Lamphu’s Suwannakhuha district.

After the findings were disclosed, the Public Health Ministry considered a plan to ban paraquat. Last year, at least 102 people in Nong Bua Lamphu came down with necrotising fasciitis, a flesh-eating disease. Six people died from it.

The Federation of Farmers’ Safety was established not long after the possibility of a paraquat ban emerged.

Thailand is the world’s fourth-largest importer of paraquat, with sales soaring past Bt1 billion a year.

It remains unclear whether the Federation of Farmers’ Safety has any direct link to herbicide-selling firms. However, the federation has apparently often joined activities alongside the Thai Crop Protection Association, which was founded by herbicide and pesticide sellers.

During an exclusive interview with The Nation at the height of paraquat controversy, Puangrat said she believed her research findings must have affected the businesses of some companies, as friction from the private sector had become intense.

On March 27, a subcommittee established by the Hazardous Substances Committee will conclude on whether to act on the Public Health Ministry’s suggestion that paraquat be banned.

She said firms had contacted her university and tried to prevent her from presenting her research findings to the National Legislative Assembly (NLA) and various government agencies.

“They reacted really fast. Initially, my university and I were caught off guard,” she said.

Puangrat said her university agreed to fund the research in Nong Bua Lamphu after Warangkana Inthalohith of the National Health Assembly raised concerns that flesh-eating cases in the northeastern province might be linked to farm chemicals. The research kicked off with the approval from the Nong Bua Lamphu Public Health Office.

“Local people told me that they developed rashes and wounds one day after wading through local water. If they didn’t rush for treatment, a risk of amputation emerged within the next three to four days,” Puangrat said. She said in Tambon Boontun, sugarcane growers had used herbicides at the amount three to four times higher than the recommended levels, and their plantations surrounded a closed reservoir.

“After samples were tested and analysed, I could not sleep for a week because the results were frightening,” she said. She said her team had re-examined the results to double-check them.

“After the results were confirmed, I decided to speak to the media with prior consent from the Nong Bua Lamphu governor,” Puangrat said.

She said she knew her research findings, when released to the public, could turn her into a target of efforts to discredit her.

“I faced such attacks before for research I did in Nan years ago,” Puangrat said, “Back then, several government agencies questioned the accuracy of my research. But eventually, time will tell the truth.”

In Nan, Puangrat found a local river contaminated with herbicides including glyphosate. Her research was initially questioned, but several other organisations later reported similar reports in Nan. Campaigns were then conducted to discourage the use of chemicals on farmland and to promote organic farming.

“I decided to speak up again no matter what … I know in the end the truth will prevail,” she said. Puangrat said she hoped that relevant authorities would quickly fix the problems, instead of questioning the validity of her research.

She has maintained that her research was conducted strictly in line with proper standards. Funders such as the Thailand Research Fund (TRF) had closely monitored implementation to ensure the quality of her research, she said.

Puangrat added that she had often heard authorities’ complaints that research by Thai academics was usually “headed to the shelves” – that is, to be stored in a library but not put to practical use.

“Actually, we have already conducted useful research. But some authorities have simply ignored it,” she said.

Puangrat said she believed other researchers might have discovered high concentrations of paraquat in Nong Bua Lamphu before her team, but were reluctant to release their findings to the public.

“Even as a veteran in the field, I have still faced a lot of trouble,” she said.

The TRF named Puangrat as an outstanding researcher in 2014. In 2011, the Naresuan University also honoured her research efforts.

Puangrat said she was not the only researcher facing intense criticism and pressure after releasing findings that had possible significant ramifications.

“Like Pornpimol, I speak up to protect people in general,” she said. “But we are treated with doubt.”

Puangrat said she hoped research institutions would help communicate with the government, the private sector and the public about research processes and objectives.

“We have conducted research for you [policy-makers] to use,” Puangrat said.

She added that researchers usually provided recommendations that relevant parties should consider.

Local people in areas where she has conducted her research, such as those in Nong Bua Lamphu, have apparently wanted help, because they willingly cooperated with research teams.

Despite the many challenges Puangrat faces, several organisations have come forward to defend her.

Greenpeace Southeast Asia, FTA Watch, BioThai Foundation and the Foundation for Consumers are among agencies condemning the Federation of Farmers’ Safety for taking action against Puangrat.

“Academic freedom must be protected, particularly when academics use their knowledge and expertise to protect the quality of life among people,” they said in a joint statement.