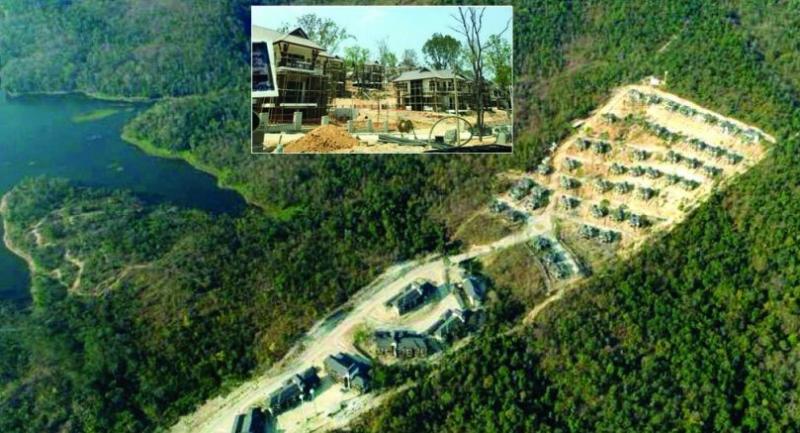 Court buildings and officials’ residences are seen at the foot of Doi Suthep mountain in Chiang Mai province. The construction has angered many local residents and raised concerns about environmental impacts.

Project ‘gone too far to stop’ despite residents’ environmental worries

ARMY chief General Chalermchai Sittisart has given the green light to resume construction of court buildings and official residences at the foot of Chiang Mai’s Doi Suthep, near Doi Suthep-Pui National Park.

On March 20, he had ordered the suspension of construction work after residents raised concerns about the appropriateness of the buildings and warned about possible adverse environmental impacts.

“As our investigation found construction had proceeded in line with the law and it was already 95 per cent complete, I have allowed the construction work to resume,” Chalermchai said.

The plot in question is considered Ratchaphatsadu land belonging to the state. However, when the project started two decades ago, the plot was under the authority of the Army.

“The Office of the Chief Justice, Region V, first asked for permission to use the land in 1997. The Army didn’t give its approval that year. But after the office finally submitted the request again in 2003, the Army gave its nod,” Chalermchai said. However, he said the approval just meant the land plot had been transferred to another state agency.

“It’s not that we approved the construction,” he said.

Construction began in 2013 and, in four phases, cost about Bt1 billion.

The construction work has taken place within an authorised 147-rai (23.5-hectare) zone, the project’s proponents have said, adding that none of the buildings encroached on the nearby national park.

The buildings are intended for the Appeals Court Region 5 and residences for court officials.

Chalermchai said all parties involved should hold talks to ease residents’ concerns about the buildings. “Talks are necessary to address people’s concerns and boost the public’s acceptance,” he said.

He added that the construction project had “gone too far to stop”.

“Construction uses the state budget. We should let them go ahead with minimum impact and solid consideration for local residents’ feelings,” he said. The Army chief spoke one day after Court of Justice (COJ) secretary-general Sarawut Benjakul defended the construction of the buildings, saying they were legal and his office placed a strong emphasis on environmental conservation.

“We are giving importance to environmental conservation and we are not just talking. On the COJ’s founding day, April 21, we will plant trees and do related activities. We understand the public’s concerns,” said Sarawut, citing the Bangkok-based Ratchadapisek Criminal Court’s solar-cell installation project as an example of the COJ’s environmental awareness.