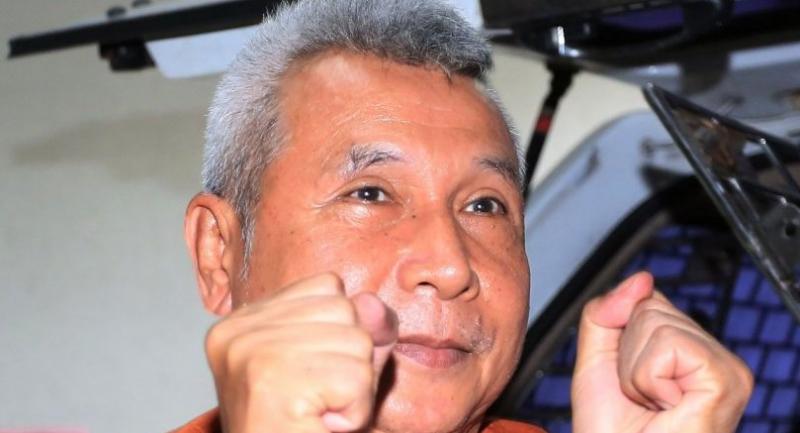 COUNTRY SINGER and political activist Thanat Thanawatcharanon, known by his stage name “Tom Dundee”, has been acquitted of a lese majeste charge for a public speech he made in Lamphun province in 2011.

The Criminal Court’s verdict yesterday dealt with only one of four charges he faced under the draconian law related to his political struggle over recent years.

He was previously sentenced to three years and four months in jail by a military court, as well as seven years and a half by the Criminal Court in 2016. Another case involving the same charge is under the Ratchaburi provincial court’s consideration.

The lese majeste law is among several statutes that have been frequently used by authorities and conservative factions to silence activists during the political conflict in recent years.

In a separate case, Phu Khieo Provincial Court yesterday dismissed a charge of violating the referendum law against the young activist Jatupat “Pai Dao Din” Boonpatararaksa on the grounds that his campaign to oppose the junta-sponsored charter draft was not a crime but an act of freedom of expression.

Jatupat and fellow activist Wasin, who has asked to be referred to only by his first name, were accused of violating the Referendum Act for distributing leaflets listing seven reasons not to accept the constitution draft on August 6, a day before the referendum, at Phu Khieo Market in Chaiyaphum province.

Both were charged for allegedly causing a disturbance against the referendum, a crime punishable by up to 10 years imprisonment.

However, the court yesterday ruled the two were not guilty, because the distribution of leaflets was an exercise of protected rights and freedoms, which was permissible under the Referendum Act.

Their actions were not deemed seditious or provoking an uprising, the court ruled, arguing they had expressed their opinion about the charter draft, which they had the right to do.

The contents in the leaflets did not distort the truth, which was prohibited by the act, the court ruled.

Jatupat, however, remains in prison after having been found guilty of lese majeste for sharing an article deemed critical of the monarchy. His five-year prison sentence was halved after he confessed.