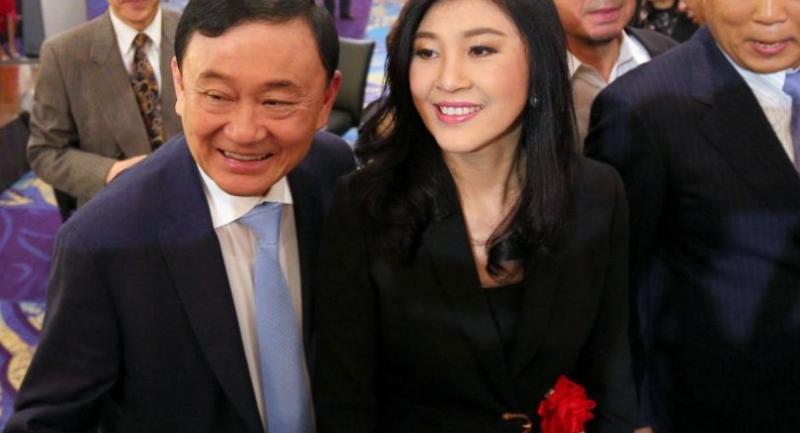 Thaksin and Yingluck on a private visit in Tokyo. Photo: AFP

THE JUNTA yesterday played down the current visit of former prime ministers Thaksin and Yingluck Shinawatra to Japan, with a key figure disputing a claim by the Pheu Thai patriarch that the party would gain “another landslide victory” in the next election.

Deputy Premier and Defence Minister Prawit Wongsuwan said he was not convinced.

“He can say whatever he likes. The media may believe what he says. But if you ask me, I don’t believe it,” he said, when asked to comment on Thaksin’s claim.

Prime Minister Prayut Chan-o-cha, before his flight to Vietnam, was also asked to comment on the ongoing trip of Thaksin and Yingluck to Tokyo. Prayut just smiled and offered no response.

During an interview with Japanese media on Thursday, Thaksin said: “We have many good people in Pheu Thai Party. They should be able to lead the party to another landslide victory.”

“We wish we can return to democracy as soon as possible. Thailand needs a system that allows free speech and guarantees human rights to the people. In this modern economy, you need democracy to allow more creativity to happen in Thailand,” he told Japanese media.

The new Political Parties Act prohibits any political party from allowing an outsider to influence its internal affairs and the violating parties risk getting dissolved.

Some Pheu Thai figures expressed concern recently after reports that a group of party politicians met Thaksin to ask him who should become the next Pheu Thai leader. They feared a possible legal action could lead to the party’s dissolution.

Thaksin holds no executive position in Pheu Thai but has retained much influence in the party, still being referred to as “the big boss” by many party politicians.

He and his sister Yingluck, both fugitives who live in self-exile abroad, arrived in Japan on Thursday and are set to stay there through tomorrow before travelling to China, Japanese media reported. It is their second visit to Japan this year following the previous one in February.

Former Japanese politician Hajime Ishii, an acquaintance of the siblings, invited them to an event in Tokyo to celebrate the publication of his new book, Kyodo news agency reported. They were introduced on stage and photographed with other guests.

Yingluck, when asked by a reporter whether she was living in London, replied: “No. We are just travelling to different countries.” She declined to answer a question if she had been given political asylum to stay in the United Kingdom, simply saying: “Sorry, sorry.” Thaksin’s daughter Paethongtarn said in her Instagram message that Thaksin was excited to join the event, adding that he had been invited by the host “long ago”.

General Prawit, who is in charge of security affairs, said yesterday that Thai authorities were in the process of seeking the arrest of both Thaksin and Yingluck for prosecution in the country.

He said the authorities had to inform their Japanese counterpart that the court cases against Thaksin and Yingluck were not political in nature.