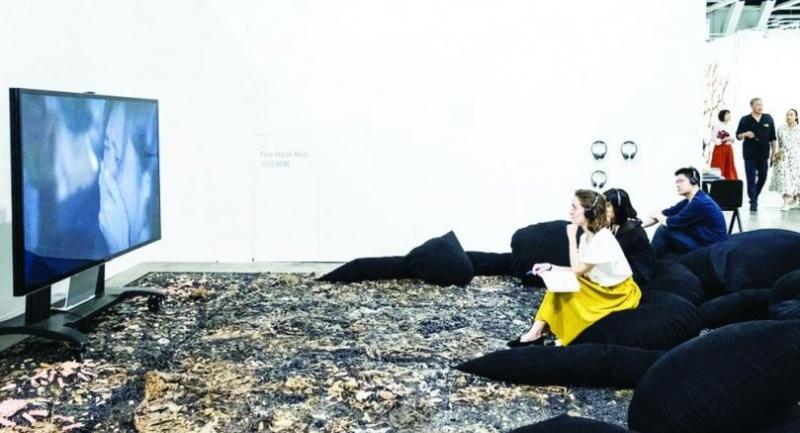 Thai artist Korakrit Arunanondchai has been drawing crowds with “History in a room filled with people with funny names 4 (with stage for extinction) 2018”, his latest film in an ongoing series.

THAI contemporary art has been sharing the spotlight at Art Basel Hong Kong, Asia’s biggest art gathering, though the focus is diffused among announcements of upcoming events in Bangkok and South Korea and the individual artists represented at the fair.

With Art Basel ending today, the Thais are offering attendees much more to look forward to.

Apinan Poshyananda, artistic director of the Bt150-million Bangkok International Art Biennale kicking off in October, was in Hong Kong to unveil the full roster of 75 artists from 33 countries who will be participating.

Professor Dr Apinan said the theme of the debut Bangkok event continuing into February 2019 would be “Beyond Bliss”, and 40 foreign artists and 35 Thais would create new works accordingly.

“We live in a state of fear, protest and delusion,” he said, “and we have invited these artists to comment on this lack of bliss. Bliss is a temporary and ephemeral experience, and our artists will seek to interpret different variants and intensities.”

Kusama will be presenting luminous pumpkins and Heri Dono will release flying angels over the Chao Phraya River. Nara will set a bronze sculpture in Lumpini Park and Choi Jeong Hwa will have a massive plastic installation at the Bangkok Art and Culture Centre.

Wat Arun will host a video installation by Sakarin Krub-On and a “sacred enclosure” designed by Sanitas Praditassnee.

Elsewhere at Art Basel, Gridthiya Gaweewong – the only Thai curator on the team preparing for the 12th Gwangju Biennale in South Korea – revealed her plans for that event running from September 7 to November 11.

Its theme is “Imagined Borders” and there will be seven separate exhibitions assembled by 11 curators.

Dr Gridtiya, who is artistic director of the Jim Thompson Art Centre in Bangkok, will present a show exploring beliefs that have emerged from border conflicts and the patterns of mass migration within Southeast Asia and beyond since the colonial era.

“I’m interested in my generation’s time period, those of us who grew up during the Cold War, at the beginning of globalisation,” she said. “It was a turning point in history, dividing the world into the free world and the communist world, and this was the socio-political context that shaped our generation.

“It’s interesting to see Thailand engaged in global politics because of its strategic position in Southeast Asia. It created radical shifts in the country at many levels. We lived in the shadow of Cold War politics, which was full of violence and untold stories. Many artists from the region have begun unearthing these stories and I find their work extremely invigorating.”

Asian collectors in general seem keen on Thai contemporary art. It was given the spotlight at Singapore Art Stage in January and there was a lot of chatter about it at Art Basel.

Four globally renowned Thais are among the 5,000-plus artists from around the world represented at Art Basel – established conceptual artists Rirkrit Tiravanija, Araya Rasdjarmrearnsook and Pinaree Sanpitak and fast-emerging talent Korakrit Arunanondchai – all under the auspices of overseas galleries.

Korakrit, represented by London’s Carlos/Ishikawa Gallery, has been drawing crowds with “History in a room filled with people with funny names 4 (with stage for extinction) 2018”, his latest film in an ongoing series. Arty.net listed his corner of the fair one of top 10 booths to visit.

The Bangkok International Art Biennale is one of three major art events coming up that are expected to garner global attention. The Bangkok Biennial is taking place from July to September and the Thailand Biennale will be in Krabi from November to February.

Apinan believes his event, the biggest of the bunch, will be “exciting and attractive” thanks to support from many sectors. “Bangkok is an exhilarating hub of Asia, and art is only part of it,” he said.

“Our intention is not to parachute in foreign artists to make superficial socio-political comments for the sake of sensationalism, but rather to allow them to contemplate and work at specific sites.

“Of course the Thai artists will have artistic messages reflecting on the current state of socio-political stagnation and unpredictability in Thailand. This is one of the steps to overcoming obstacles and reaching ‘bliss’. We all have our ways and solutions to find the stairway to heaven.”

Gridthiya’s efforts to engage with the regional and global art worlds will also broaden the horizons for Thai art.

“As far as Thai contemporary art’s place on the world map, we are there, with as much presence as the East Asian and South Asian art for sure.”