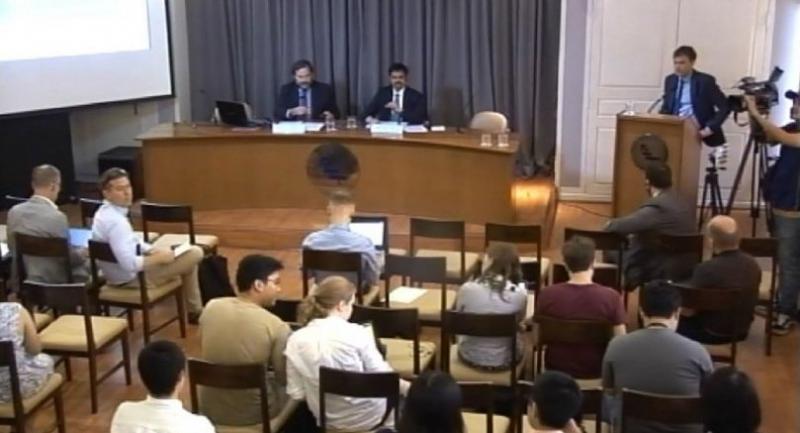 The United Nations Working Group on business and human rights had made the recommendations to the government and the business sector after finishing a 10-day official visit to the country, the group told a press conference at the Foreign Correspondents Club of Thailand yesterday.

The group urged the government to extend the migrant workers’ registration period – which ended on March 31 – tackle human trafficking in all sectors not only in the fisheries industry, and revoke laws – including orders issued by the National Council for Peace and Order (NCPO) – that deprive human rights. Dante Pesce, vice-chairperson of the Working Group, stated that Thailand had done well in its efforts to protect human rights. He formed his conclusions after inspecting human rights protection at business operations in Bangkok, Songkhla, Chiang Mai, Khon Kaen and Samut Sakhon provinces, and meeting more than 250 representatives of civil society organisations, affected individuals, migrant workers, academics, as well as members of business sectors and authorities. Pesce, however, said there was still room for improvement for more comprehensive and proper corporate respect for human rights and strengthening access to effective remedies. He said there were some problematic areas regarding protection of migrant workers’ rights, poor public participation in major development projects, and obstructive laws that deprive people of their rights.

One of the most prominent issues that stemmed from the inspection was rights protection for migrant workers. Surya Deva, the chairperson of the Working Group, said they had found out that more than 60,000 migrant workers had become illegal workers because they failed to register before the March 31 deadline. He said these workers risked being exploited by traffickers and corrupt officers.

Deva suggested that the Thai government extend the registration period and create mechanisms to ensure that the rights of migrant workers will be respected as per UN Guiding Principles on Business and Human Rights (UNGPs).

“The government should also empower migrant workers, including through enabling them to exercise freedom of association and collective bargaining,” he said. “We would, therefore, encourage the government to ratify ILO [International Labour Organisation] Convention numbers 87 and 98. All migrant workers should be provided information about their rights and the complaint hotlines on their arrival in Thailand in their native languages.”

He also stated that despite the government’s intensive crackdown on human trafficking in recent years, which had helped improve the situation on forced labour in the fisheries sector, human trafficking was yet to be eradicated from the country.

“We note that the risks of forced labour and trafficking are also present in other sectors in Thailand, such as agriculture and construction, which have a high number of migrant workers. We encourage the government to replicate and scale up measures taken in the fisheries sector to improve oversight of labour conditions in other sectors,” he added. Pesce said after discussions with human rights defenders, CSOs, and affected people, it was found that one of the biggest hurdles in preventing adverse human rights impacts on big projects of both the private and public sector were the oppressive laws and Strategic Litigation against Public Participation (SLAPP) lawsuits.

“We are concerned that the relevant NCPO orders often result in placing unreasonable and unwarranted restrictions on the right of affected people to raise legitimate concerns and protest peacefully,” he said.

“We also heard from community members from across the country how they had been called to meetings by the military for so-called ‘attitude adjustment’ with the aim of convincing them to stop raising concerns about adverse impacts of business operations and development projects.”

He emphasised that the government should amend some of its laws and NCPO orders to align them with the guidelines to protect human rights defenders such as Article 161/1 of the Criminal Code and the Witness Protection Act. He also called for efforts to ensure that defamation cases will not be used by businesses as a tool to undermine legitimate rights and freedoms.