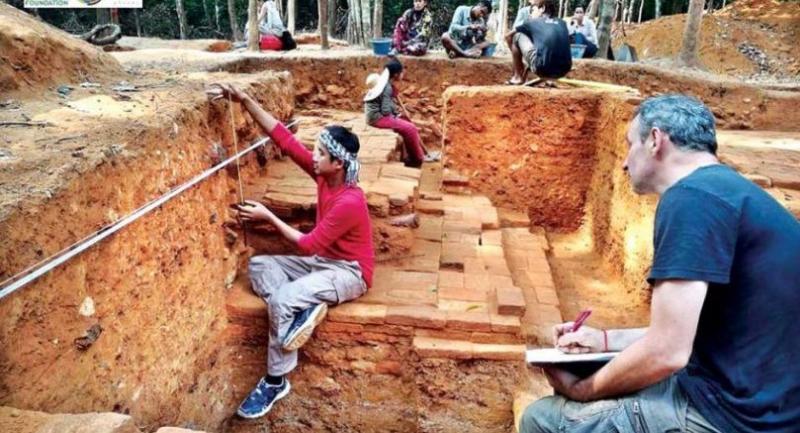 A team of archaeologists work to unearth a site believed to be the royal palace of King Jayavarman II, who made his capital atop Phnom Kulen. Photo supplied

An archaeological dig drawing to a close this week at Siem Reap's Phnom Kulen has lent greater credence to the theory that it was the site of the royal palace of the Angkor Empire's first ruler, Jayavarman II.

The five-week excavation within the Phnom Kulen National Park focused on a specific building within a 400-metre-by-600-metre site believed to be the palace compound of Jayavarman II. It was first identified in 2009, said Jean-Baptiste Chevance, the program director of the NGO Archaeology and Development Foundation, which works closely with the Apsara Authority and trains student archaeologists.

"The first investigation was precisely on that building in 2009 and the second was the Lidar survey in 2012, which confirmed that the site in itself was [likely] the royal palace," he said, referring to a remote sensing method that can reveal ground features otherwise hidden by vegetation. "We are interested in the way it was constructed and the way it was used."

To answer those questions they returned this year, with a team of 60 local and international archaeologists and workers and the support of the Environment Ministry and the Apsara Authority.

"It's obviously one of the most important buildings because of the quality of the construction," Chevance said.

Ngin Sarun, an archaeologist with the Apsara Authority, said questions to be addressed are whether the structure was the palace or the residence of the ninth-century king.

"We have not concluded 100 percent that it is a palace," he said, noting the team had dug about 1.5 metres down and collected ceramics and pottery. According to Chevance, these, as well as soil and other collected samples, will reveal details about the building's use and construction.

The square building is surrounded by a series of concentric walls and pavements with an eastern facing entrance.

"We wanted to know more about the specific building because it's the most important in the royal palace . . . It's apparently the only one made of such an amount of brick and such good quality," he said.

Radio-carbon dating from previous digs, he continued, show that the building was abandoned at the end of the ninth century, corresponding with accounts from stone inscriptions that Jayavarman II built his capital atop Kulen Mountain at the end of the eighth and start of the ninth century after unifying fractured Cambodian kingdoms into one empire and establishing his rule by divine right.

"This settlement [and] this huge enclosure [the royal palace compound] is very organised and was occupied for a short time during the ninth century," he said, noting that the reasons for residents abandoning the capital is a larger research focus of the project.

The compound's "massive" size, its shape and its positioning within the larger urban grid discovered by LIDAR surveys suggest to Chevance that it was indeed the royal palace, though no inscriptions at the site as of yet provide any clues.

"[From] some of the artefacts, such as the ceramics that we unearthed, we can see the fact that it's one of the most important buildings, but we still don't have a full understanding of its function," he said.

Environment Ministry officials declined to comment on Sunday but in a post on the ministry's Facebook page on Saturday they wrote that one goal of such archaeological activities is to have Phnom Kulen inscribed as a Unesco World Heritage Site. It is currently on the body's "tentative list".