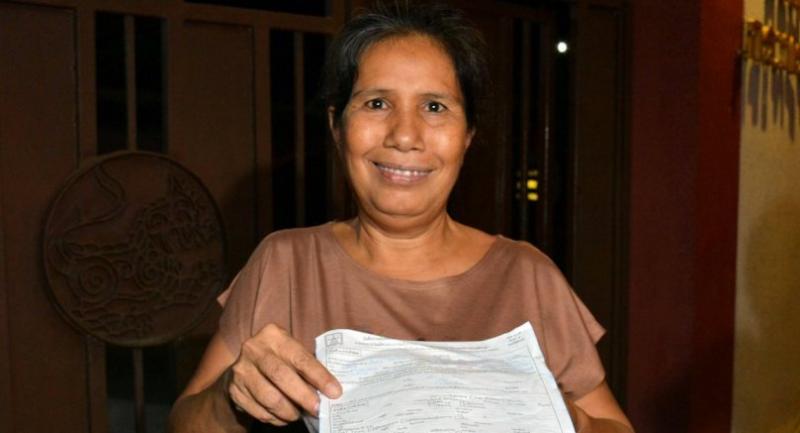 THE APPEALS Court yesterday upheld a lower court verdict acquitting a former red-shirt protester, active during the 2010 rallies, of possessing explosives and ammunition in connection with a deadly explosion in Nonthaburi province that year.

The court found that the prosecution lacked sufficient evidence or convincing witness testimonies to prove that Chiang Mai resident Amporn Jaikorn, 56, was guilty of possessing explosives or entering the apartment room where the explosion occurred.

The court upheld the acquittal verdict of the lower court in November 2016. Amporn had denied all the charges against her.

Amporn’s lawyer Benjarat Meethien said yesterday that the defence was preparing to sue the Royal Thai Police and investigators working on the case for malfeasance and use of false evidence. The defence would also seek damages in a separate civil case for the time Amporn spent in jail during the court trial, the lawyer added.

The defendant reacted with a smile on hearing the verdict yesterday. She said she would make merit in the upcoming Songkran holidays.

In October 2010, a powerful explosion occurred at a room in the Samarn Metta Mansion in Nonthaburi’s Bang Bua Thong district, leaving four people dead and 10 others injured. Authorities suspect the explosion was caused by a homemade explosive device accidentally ignited by an occupant of the room. Amporn became a suspect as witnesses claimed they saw her at the building before the explosion.

In their lawsuit, public prosecutors said Amporn and other protesters affiliated with the red-shirt United Front for Democracy against Dictatorship (UDD) had collected explosives and substances used in the production of explosive devices. Police also found an AK-47 assault rifle and 129 bullets in their possession. Amporn had also been acquitted in a separate case by the Min Buri Provincial Court in September last year. In that case, she was a co-defendant, charged with possessing or making explosives related to an explosion in Bangkok’s Min Buri district in March 2014 that left two people dead.

Meanwhile, four red-shirt leaders led by Nattawut Saikuar, asked the National Anti-Corruption Commission (NACC) yesterday about progress in reviving a case against former Cabinet members accused of involvement in a crackdown on anti-government protesters in 2010. A total of 99 people were killed during the 10 weeks of street protests held by the UDD between March and May 2010. The victims included protesters, police and military officers, passers-by and foreign journalists.

Nattawut and three other UDD leaders appeared in clothes with dark blotches to make them look like homeless people. He said the NACC appeared to be less eager about reviving the case against former prime minister Abhisit Vejjajiva and his ex-deputy Suthep Thaugsuban from the Democrat Party, when compared to the agency’s eagerness in pursuing a case against former premier Somchai Wongsawat of the Pheu Thai Party. The NACC took Somchai to court in connection with a police crackdown on yellow-shirt protesters in October 2008 that left two people dead and hundreds of others injured.