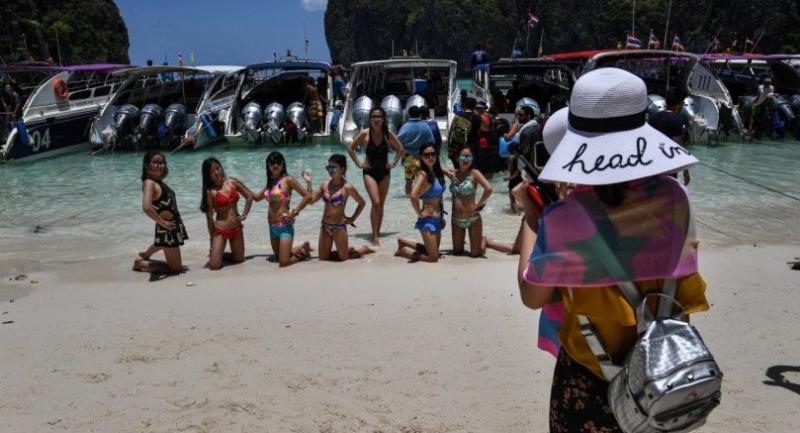 Made famous by the 2000 movie "The Beach" starring Leonardo DiCaprio, Maya Bay on the western Thai island of Koh Phi Phi Ley is now a case study in the ruinous costs of runaway tourism, swamped by up to 4,000 daily visitors.

"There is too many people here, it's bad," lamented Saad Lazrak, a 61-year-old from Morocco, as crowds around him swallowed the stretch of sand encircled by an amphitheatre of limestone cliffs.

Across the region, Southeast Asia's once-pristine beaches are reeling from decades of unchecked tourism as governments scramble to confront trash-filled waters and environmental degradation without puncturing a key economic driver.

Thailand's Maya Bay will be off limits for four months from June to September, officials announced last month, in a bid to save its ravaged coral reefs.

In the Philippines, President Rodrigo Duterte ordered this month the Boracay beach resort closed to tourists for up to six months from April 26, describing the destination as a "cesspool" tainted by sewage dumped directly into the sea.

Indonesian officials, meanwhile, declared a "garbage emergency" last year swamping a six-kilometre stretch of coast along the island of Bali.

The island's grim coastal pollution was highlighted in March by British diver Rich Horner's viral video of swimming through a dystopia of trash swirling off shore.

"Plastic bags, more plastic bags, plastic, plastic, so much plastic!" Horner said in a Facebook post that has been viewed more than a million times.

Conservationists and governments are worried about the health of coral reefs, which are in a dire state globally due to climate change and rising sea temperatures.

When exposed to warmer waters, they shed the algae that dazzle the eye and are vital to marine eco-systems, leaving the corals diseased or bone-white in a process called bleaching.

Environmental stress, including pollution, human contact and exposure to plastics that comes with mass tourism are also major threats to reefs that are part of the draw for snorkellers and scuba-divers.

"Tourism has a series of detrimental effects on coral health," said Eike Schoenig, a Thailand-based marine biologist at the Center for Oceanic Research and Education.

Countries in Southeast Asia are looking to stem the threats without cutting off the cash flow of a regional tourism boom, led by China, the top source market for travellers to the region.

But what is good for business can be bad for beaches.

Songtam Suksawang, Thailand's National Park Office Director, told AFP he personally inspected the beach at Maya Bay and said it "must definitely be (temporarily) closed" in order to rehabilitate it.

He said authorities are discussing new rules once the shut-down is lifted, such as restrictions on the number of daily visitors, better regulation of boats and a higher entrance fee.

Thailand is also conducting studies on six other marine parks, while the Philippines is weighing action on other top destinations buckling under mass tourism.

But governments are wary of curtailing an industry that creates jobs and buoys economies.

Spending on travel and tourism contributed nearly $136 billion to the region's GDP in 2017, a figure forecast to rise to $144 billion this year, according to the World Travel & Tourism Council.

The cost of the closures is already being felt in the Philippines, where hundreds of Boracay hotels and tour companies are facing steep losses from cancelled rooms, flights and other bookings.

But some countries are not taking such dramatic steps.

In Indonesia, the tourism ministry said there were no plans to close Bali or any other holiday destination in the archipelago, although it acknowledged that pockets of the tropical paradise were under strain from heavy tourism.

"Shut down Bali? I don't think we will need to do that yet," said ministry spokesman Guntur Sakti. "Bali is the centre of Indonesian tourism."

In fact, Indonesia has identified 10 other destinations where it is trying to boost visitors and replicate Bali's success, including neighbouring island Lombok and Lake Toba in Sumatra.

Experts are also sceptical that short shut-downs will have lasting effects.

"Bottom line is that temporarily closing the beach is probably not the optimal solution to these problems. It only take a day for a bunch of incompetent snorkellers to trash a small reef," said Andrew Baird from the ARC Centre of Excellence for Coral Reef Studies in Australia.

In Thailand, the government hopes to draw people to lesser known beaches.

"We are working very hard to spread people out, not to go to one condensed area," said Thon Thamrongnawasawat, a marine expert working with the parks and tourism authorities.

"It's very touristy. There wasn't a patch of sand that didn't have people laying down on it, taking photos," Oliver Black, a 22-year-old tourist, said of his afternoon at the destination.

As for his thoughts on the looming closure?

"It would not really upset me if I wasn't able to go to (back to) Maya beach," he told AFP.