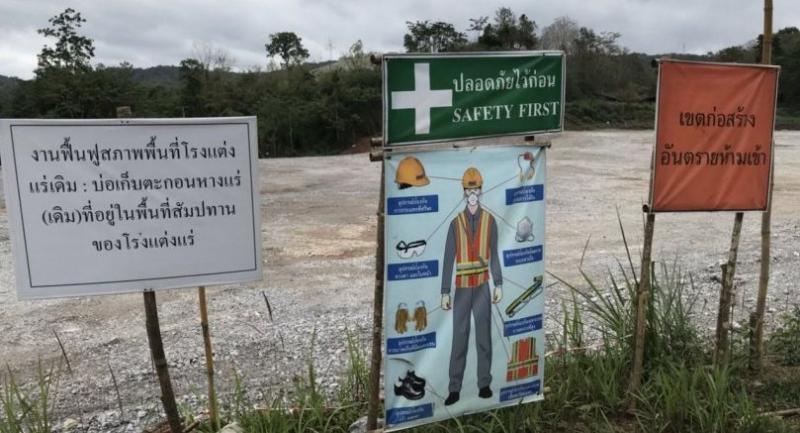 JUSTICE HAS not arrived for the local people in a lead-contaminated area of Klity Village in Kanchanaburi province. Environmental restoration has been slow and obscure, while the affected people still await compensation.

Environmental restoration has been slow and obscure, while the affected people still await compensation. Surapong drew attention to the fact that the PCD environmental restoration plan had no provision for the complete disposal of lead-contaminated sediment in the creek. He said he was worried the creek would remain contaminated and threats to the local people’s health would also remain. He disclosed that the polluters – Lead Concentrate Co Ltd and the company’s executives – were yet to comply with the judgement of the Supreme Court on September 11, 2017, which ordered defendants to compensate all the 151 affected people for a total of Bt36.05 million and also clean up the contamination in the creek.

He said for two decades the people of Klity Village have had to live with lead contamination in their main water source – Klity Creek – as a result of one of the worst environmental disasters from direct disposal of slag and mining waste into the creek.

Local people fought hard and won an administrative lawsuit against the PCD.

The Supreme Administrative Court judgement on January, 2013, ordered the PCD to properly perform its duty by cleaning up lead contamination in Klity Creek until a environment is entirely restored and lead levels in the water, sediment, and ecosystem are within the safe levels.

The PCD said it had contracted Better World Green Co Ltd for environmental restoration of Klity Creek within 1,000 days at a budget of Bt600 million. The contract came into effect on November 16, 2017, and ends on August 23, 2020.

Surapong said that instead of removing all contaminated sediment in the creek to detoxify and landfill by an industrial waste management company, the operation only moved the toxic sediment to a landfill pit in the forest upstream from the villages without any detoxification.

He was worried that toxic lead would later leak from the landfill and contaminate the creek once again. A Klity Lang villager, Wichit Arunsrisuwan, revealed that the PCD had not kept their promise to dig up all lead-contaminated soil and refill with laterite. Their clean-up operation last month only covered the contaminated soil with laterite, raising questions and concerns among local people about the sincerity of environmental restoration, as the lead contamination was still there. Commenting on the restoration plan for Klity Creek, environment expert Sonthi Kotchawat said that landfill of contaminated sediment from the creek in the local area would not be a problem if the contracted company strictly follows a secure landfill procedure. This requires two layers of protective liners at the bottom of the landfill pit and neutralisation of the toxic substance in the contaminated sediment, he explained.

Sonthi stressed that the major mistake the PCD had made in this case was it did not transparently disclose information about environmental restoration and did not allow the public to monitor the operation, which was a violation of the Official Information Act.

He suggested that the PCD set up a monitoring committee, with representatives from both the state authorities as well as local people, to jointly oversee the environmental restoration and work together to solve this chronic problem.