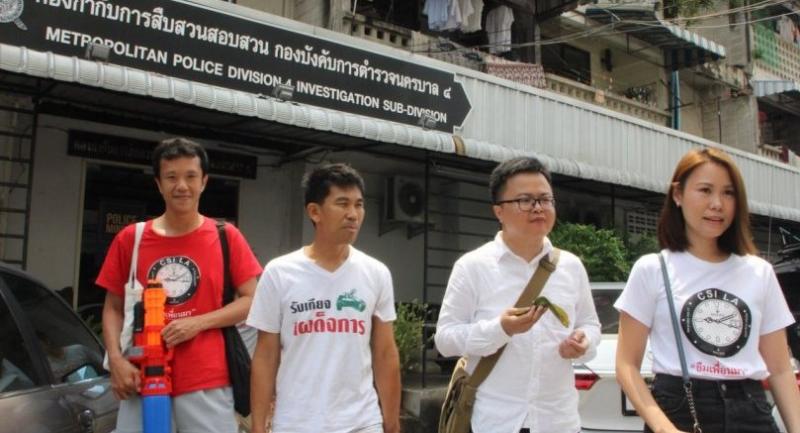 TWO PRO-DEMOCRACY activists were apprehended by police without an arrest warrant, with one alleging physical abuse, as they planned to “bless” Deputy Prime Minister Prawit Wongsuwan, who opened his residence yesterday to receive well-wishers for the Songkran Festival. Prime Minister Prayut Chan-o-cha splashed water around cheerfully as he led military and senior officers to bless the 72-year-old key junta figure who had just returned from an overseas trip last week after a health check-up.

Activists Ekachai Hongkangwan and Chokchai Paiboonratchata also intended to join the festivities but were stopped by police officers from Lat Phrao Police Station.

Chokchai felt a sudden hearing loss after one police officer pressed his head against a police van seat, as they whisked him away from Ekachai’s house in Lat Phrao Soi 109. According to Ekachai’s Facebook post, their plan was to light 36 incense sticks, deliver a watch garland and play the Thai fiddle for Prawit at his residence in Lat Phrao Soi 71 yesterday.

All the deeds were intended to mock Prawit over his luxury-watch scandal. His possession of an estimated Bt30-million worth of luxury watches might have pointed to unusual wealth and an intent to conceal assets but the National Anti-Corruption Commission (NACC) declared that it had found “no irregularity” in the case. The NACC, whose board was appointed by junta-picked legislators, last month cleared Prawit’s name and concluded that all 22 watches seen to be worn by Prawit were “borrowed” from a friend.

The fiddle playing, meanwhile, was to harp on the Thai idiom, “playing a fiddle to a buffalo”, which means to speak or advise unwise people who will never understand.

Ekachai has made several attempts in the past to hand watches to Prawit as a symbolic protest since the scandal was exposed last December. Yesterday proved no exception and he failed to reach Prawit. Ekachai and Chokchai were stopped by officers as early as 5.45am.

While police officers said that they had to stop Chokchai as he tried to run away, creating a scene, the two activists denied the account. “They [officers] said that ‘a boss’ had ordered them to stop our activity,” Ekachai said.

“When I was at the police station, they tried to make me sign a testimony saying that I instigated the public to join me. I refused to sign it as I was worried about it being used for sedition charges,” he continued, referring to the Criminal Code’s Article 116, a law frequently used by the junta against dissidents. Chokchai added that he was also abused and physically assaulted by the police officers. “I was surrounded by around 10 officers when I waited for Ekachai at a bus stop near his house,” Chokchai said. “They pressed me against the floor, covered my head and brought me to the van. They also took away my mobile phone, which I use to access my Facebook account, and erased all photos in it before returning it to me,” he said.

Chokchai added that he had his head forcibly pressed during the 30-minute ride and one officer also sat on his back. “I was treated brutally. My ear also appeared to have a problem after being pressed down for so long,” he said.

At 11am, the two were released from Hua Mark Police Station without being charged. Chokchai later went to hospital to have his ear checked. He insisted on filing charges alleging abuse by the officers.

Activist Nutta Mahattana said while the two merely intended to peacefully exercise their freedom to express their views over Prawit’s scandal, what the police had done was wrong. “The police surrendered themselves as a tool of the junta. This is no different from mafia culture,” she said. “We’ve been under this kind of regime for four years already.”