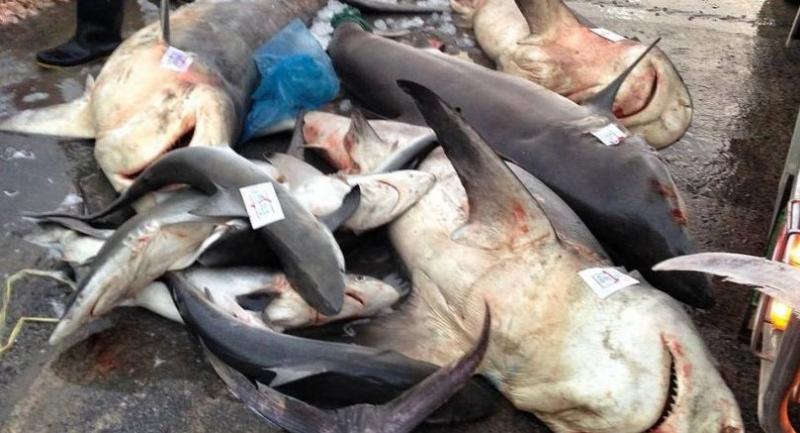 The bull shark (large) and Spot-tail sharks found after landing at a port in Thailand. Photos courtesy of Sunshine Sketcher FB page and the Shark Guardian.

WHILE PEOPLE THINK OF SHARKS AS DANGEROUS, THEIR RAPID DECLINE INDICATES THEY ARE IN A DEEPER DANGER

IT WAS AN unlucky day for Norwegian tourist Werner Danielsen after he went to swim in the sea off Sai Noi Beach in the popular tourist town of Hua Hin, in Prachuap Khiri Khan province, last Sunday. He was attacked by a creature, later identified as a bull shark, that had never officially been sighted in the area.

At first, nobody would admit that he was a shark-attack victim, because such incidents are seen as rare in Thai waters. His ankle tendon, however, was severely damaged with a sharp and deep wound.

An abbot at Wat Tham Khao Tao later released a video clip showing at least four sharks swimming off the beach, forcing the authorities to admit that there were indeed some sharks in the area, and that one of them had bitten Danielsen.

As soon as the news spread, the authorities, including those from the Marine and Coastal Resources Department, dispatched officers along the beach to ensure tourist safety. A shark net is under consideration, while a research team has been sent out to find out more about the sharks so the authorities can better deal with them.

“See, they are there! Not a few, but several. Four or five swimming past the camera, you see. Actually, I have even seen 40 to 50 of them,” said the abbot in the video. Despite the apparent abundance of sharks, marine scientists say the shark population, here and in international waters, is actually on the verge of extinction and, as such, we have nothing to fear from the animal.

Petch Manopawitr, a deputy director and Thailand programme coordinator of the International Union for Conservation of Nature (IUCN) Southeast Asia, wants to forge greater understanding about sharks and has posted information about them on the Facebook page he manages, Sunshine Sketcher.

Petch said worldwide and here in Thailand, sharks are facing a crisis – a sharp decline in population and even the disappearance of some species.

IUCN has recently released a report on the situation, and learned that one fourth of the shark species on record worldwide – nearly 300 of 1,041 species – have been threatened with extinction.

These species have been variously classified as vulnerable, endangered, or even critically endangered.

The IUCN report also pointed out that the Mediterranean and Thai waters are where the shark population has declined at the highest rate.

This coincides with the latest research by Sirichai Arunrugstichai of the Prince of Songkla University’s Department of Biology along with JD True from the Centre of Excellence for Biodiversity of Peninsular Thailand at the same department, and WT White from the CSIRO National Research Collections in Australia.

Their work, which examines the composition and biological aspects of sharks caught by Thai commercial fisheries in the Andaman Sea, was published in the Fisheries Society of the British Isles’ Journal of Fish Biology in February this year. It reflects the most up-to-date information about the Thai shark population.

The researchers looked through the by-catches (those species caught inadvertently) by fishermen at several main ports over a year, and discovered a sharp decline in the shark population. They also detected shifts in the population compositions compared to a previous study in 2004.

They managed to count 2,123 sharks, and recorded only 17 species, compared with 64 species previously reported.

The remaining 4.5 per cent of landings comprised other species including squaliform sharks, zebra sharks, and Bengal smoothhounds.

Sirichai and his colleagues noted that the catch composition was remarkably different from the previous survey of shark landings in 2004.

The current study revealed noticeable declines in landings of slow-growing, late-maturing, and low-fecundity species, including the bull shark. The absence of many species and changes in life-stage composition, they pointed out, suggested that the populations of these groups may be “close to collapse”.

The researchers have called for urgent additional studies and monitoring efforts, and highlighted the need for incentives to manage shark fisheries in the Andaman Sea more effectively. Petch knows well how little information is available and why the animal is so mythical. He said that due to difficulties in conducting research on the animals while they are in water, information regarding shark species and populations is still scant, and that available data tends to be derived from estimates from catches and landings.

It is known that sharks are slow-growing, late-maturing animals with low fertility, so they cannot reproduce fast enough to compensate for losses in their population.

Shark fishing, on the other hand, tends to be through by-catching, and there are no regulations to control the impact of this.

Realising the situation, the Convention on International Trade in Endangered Species has tried to ensure sustainable trade in some shark species -– but more needs to be done, Petch noted.

For more than 20 years, the Food and Agriculture Organisation has been attempting to encourage countries to come up with national plans guided under the International Plan of Action for Conservation and Management of Sharks. These plans are, however, not legally binding, and Thailand is still very much at the beginning stage in developing a strategy, largely due to lack of information, Petch said.

Due to myths about the species, sharks receive considerably less protection in Thailand than other animals in the wild. So far, only whale sharks are listed as a protected species here, according to Petch.

Although some protected and safe areas for them are provided under the designation of marine parks, the most serious threat – by-catches – is still largely unmanaged, Petch said. He has called for the regulation of some fishing gear that pose threats to the species, including trawl nets.

“The latest research told us clearly that their population is plunging, as we found a relatively small number of fully grown sharks. Meanwhile, their nursery grounds are disturbed, putting much pressure on the animal to replenish their population.

“It’s a situation that I call seriously critical,” said Petch. As a marine ecologist, Thon Thamrongnawasawat, who is a member of the national strategy committee on sustainable growth, also observed the news about the shark attack in Hua Hin.

He just wanted people to realise the real situation of the animal.

Pointing to the latest statistics, Thon said the catches have fallen from over 10,000 tonnes to only a few thousand in recent years, suggesting a sharp decline in the shark population in line with the worldwide trend. This, he said, has something to do with the way they are fished.

Thon said that concerned organisations, including the FAO, have realised how critically endangered the animal has become. Thailand has also been developing its National Plan of Action for Conservation and Management of Sharks, he said.

It has identified six prime points of action: the creation of biological and ecological databases about the species; assessment of the status of the animal and threats against it; development of a body of knowledge and management capacity in regard to the animal; implementation of conservation measures and regulations on fishing; development of networks and coordination; and, finally, cooperation with the international community to keep the Thai strategy in line with the international plan.

Thon himself has placed his hopes on the fifth action, wanting to see fisheries take sharks into account.

So far, he and other marine scientists have been pushing for more shark types to be listed as protected species, in addition to the whale shark. This, he said, would prompt better protection for the animal, as it would be more in focus.

“We can start from here, to raise more awareness and a degree of knowledge about the animal. We have whales, dugongs, and others as protected animals, and they started similarly.

“The fact is we tend to look at sharks as threatening animals, rather than almost-extinct ones. This may need a little adjustment in our attitudes, so we can start to see their benefits, in an ecological aspect and even in tourism,” said Thon.