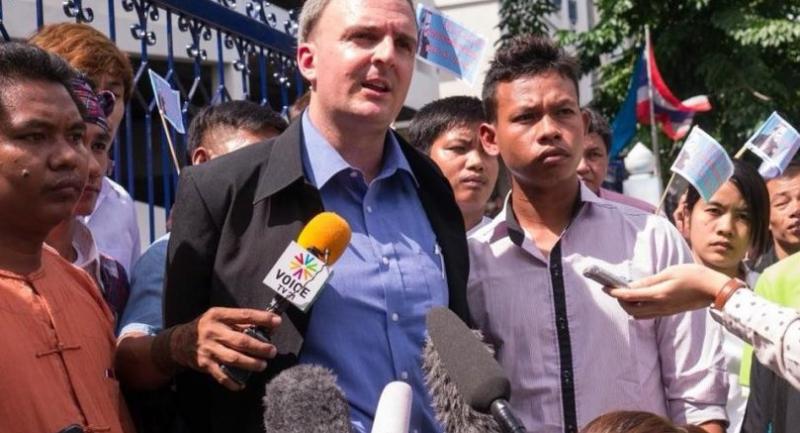 BANGKOK SOUTH Criminal Court issued an arrest warrant for rights activist Andy Hall on Tuesday, after he failed to show up for a court session.

The arrest warrant is to ensure he attends court to hear an Appeals Court verdict on multiple appeals against a September 20, 2016, criminal conviction.

Hall was sentenced then to four years’ imprisonment (reduced by one year and suspended for two years) and ordered to pay a fine of Bt200,000 (reduced to Bt150,000) after being convicted on criminal defamation and Computer Crimes Act charges. The conviction is related to a complaint filed by a Thai pineapple company, Natural Fruit Company, in 2013.

The lawsuit is related to Hall’s interviews with workers for a Finnwatch report, published in 2013. The interviewees alleged labour abuse which, when published by Finnwatch, resulted in Natural Fruit’s legal action.

Finnwatch is a non-governmental organisation focused on global corporate responsibility.

Should Hall fail to appear at Bangkok South Criminal Court again on May 31, the Appeals Court verdict may be read in absentia.

“We remain hopeful the Appeals Court will acquit Andy of all these charges. The charges against him stem from his legitimate work as a human rights defender and migrant worker rights activist. He is not a criminal,” said Sonja Vartiala, executive director of Finnwatch.

Hall is no longer resident in Thailand. He said he was not formally summonsed to attend the Court session on Tuesday.

Hall left Thailand shortly after his conviction claiming unbearable judicial harassment when additional criminal charges were filed against him by a chicken farm, Thammakaset Company Ltd, in November 2016.