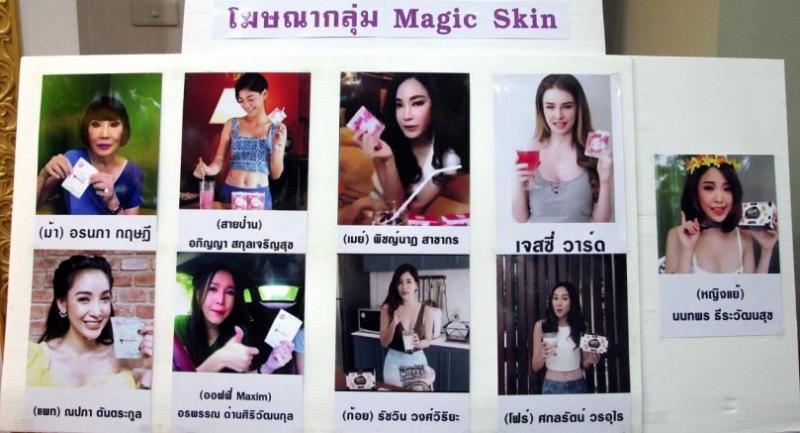 Nine Thai celebrities who have endorsed skin-care and health products related to a recent raid of “Magic Skin” factories have been summoned to give information to police on May 4-7.

The Magic Skin cosmetic and food-supplement brand is at the centre of allegations that its products were substandard, sold without proper licences and were made at unregistered factories.

Police have said that many celebrities were paid six-digit figures for endorsing the products.

National police deputy chief Pol General Weerachai Songmetta, in his capacity as the police force spokesman, on Thursday named nine of the celebrities suspected of endorsing the products.

Weerachai updated the number of involved celebrities to 59 and blamed the products for allegedly causing Bt100 million in damages to 500 people. Weerachai said the summonses were for an initial interview to determine the celebrities’ intentions in their “product review” advertisements. He said that only those deemed to have clear intentions to violate the law would be considered for any of the three following charges:

1. A violation of the Cosmetics Act 2015 by a giving false or exaggerated cosmetic-advertising message (punishable by up to one year in prison and/or a maximum fine of Bt100,000);

3. A violation of the Computer-Related Crime Act 2007 by inputting all or partially false information into computer system, resulting in damages to others or the public (punishable by up to five years in prison and/or a maximum fine of Bt100,000). All of the company’s eight suspects for whom a criminal court had issued arrest warrants have been under police custody.

The seventh and eighth suspects – Mathuros Daengsamrit and Thananpat Boonyosit – respectively surrendered to police on Tuesday and Wednesday and maintained their innocence.

Six of the suspects, including business owner Wannapa Poungson and her husband Korn Poungson whose lawyer claimed they were victims of bullying over a business conflict, have been bailed.