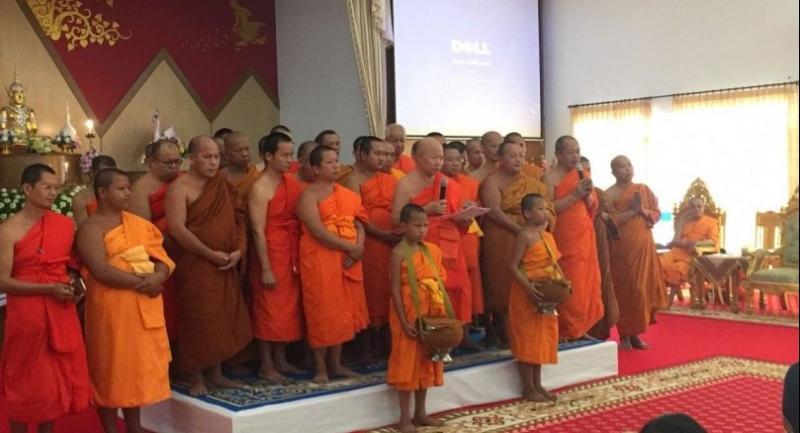 Monks at Doi Saket Temple urge authorities to vacate a plot of land at the foot of Chiang Mai’s Doi Suthep mountain yesterday.

Activist ready to raise funds to build at alternative site.

AN ACTIVIST has urged Prime Minister General Prayut Chan-o-cha to invoke his special powers under Article 44 to demolish court officials’ residences at Chiang Mai’s Doi Suthep Mountain. In return, the activist has promised to try to raise funds to support the construction of new accommodation units in another location.

“Doi Suthep is a sacred area. It is highly revered by Chiang Mai people,” Krit Yiammethakorn, who |identifies himself as the secretary-general for the Order of Thai People with Caring Concerns for Their Nation and the Chiang Mai Pracharat Power Group, said yesterday.

Krit spoke as he handed a petition to Prayut via the chief of the 33rd Army Military Circle, Maj-General Sathit Srisuwan. Built at a cost of nearly Bt1 billion, the complex of residences for court officials and judges at the foot of Doi Suthep Mountain is now almost complete.

An uproar, however, has raged for months after environmentalists claimed that the houses and condo buildings for court officials were being constructed in a forest zone.

Authorities have to date maintained that the structures are legally not inside the adjacent Doi Suthep-Pui National Park.

“Chiang Mai people will help support the decision to remove court officials’ residences from Doi Suthep by raising funds to help the government with the cost of new buildings,” Krit said.

He added that various groups in Chiang Mai province had now come forward under a united stance to oppose the residences deemed to encroach on forestland.

“My groups will join the activities organised by the Network to Reclaim Doi Suthep Forest this Sunday,” Krit said.

The network plans to stage a rally in Chiang Mai to make it clear that locals are against the construction continuing. Wararat Boonyatat, who sells local clothes in Chiang Mai province, said the location chosen was not appropriate.

“Please return the forest to Chiang Mai people. Doi Suthep forest is very important to us,” she said.

Wiboon Singkateera, who owns a car-care centre in Chiang Mai’s Muang district, said he was handing out green ribbons to people who shared the same stance.

“I will join the network’s activities on Sunday [tomorrow] and will hand out free green ribbons there too,” he said.

Boontanawich Pothaphirapat, a meatball vendor, said although his business would not allow him to physically join the activities, he would be willing to contribute by offering free drinks and food to participants. “It’s because I agree with the network’s stance,” he said.

Pattarin Butnate, a local schoolgirl, said she could not attend the network’s event but definitely would support its cause.

“I will speak up for the network wherever I can,” she said.

Kunprisorn Chaipattarawara chaya, a student at the Rajamangala University of Technology Lanna, said authorities should build the court officials’ residences in an urban zone.

“Do not disturb nature,” she said.