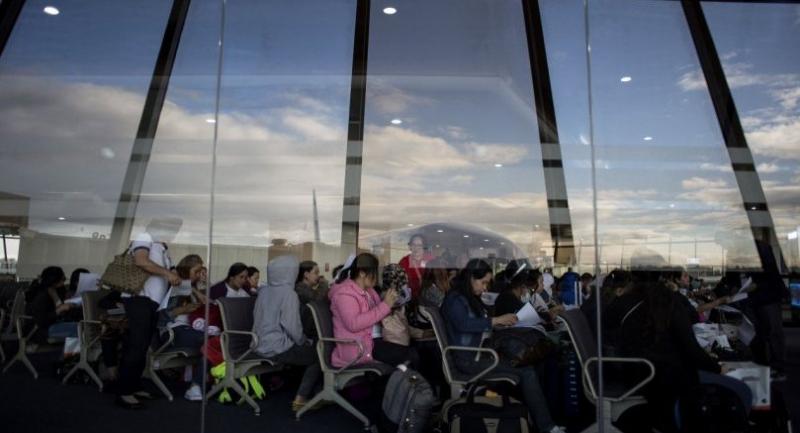 In this file photo taken on February 18, 2018, Filipina workers returning home from Kuwait fill out forms upon their arrival at Manila International Airport./AFP

A senior Kuwaiti official on Monday sought to calm a crisis with the Philippines over the treatment of domestic workers in the oil-rich Gulf state.

Philippine President Rodrigo Duterte in February prohibited workers heading to Kuwait following the murder of a Filipina maid whose body was found stuffed in her employer's freezer.

"This is largely a misunderstanding and exaggeration of some minor or one-off cases," Deputy Foreign Minister Nasser al-Subaih told reporters in Kuwait City.

"We have taken a serious stance ... but we do not believe in escalation and want to remain in direct communication to resolve the problem," Subaih added.

Subaih said those suspected of participating in the operation to help workers escape were not accredited diplomats and that they were now holed up in the Philippines' embassy in Manila.

The foreign ministry was "awaiting cooperation" for their handover to carry out an investigation.

The two nations had earlier been negotiating a labour deal that could have resulted in the lifting of the ban on Filipinos working in Kuwait.

But after the fresh escalation in tensions, Deuterate said on Sunday that the temporary ban on Filipinos going to work in Kuwait was now permanent.

Around 262,000 Filipinos work in Kuwait, nearly 60 percent of them domestic workers, according to the Philippines' foreign ministry.