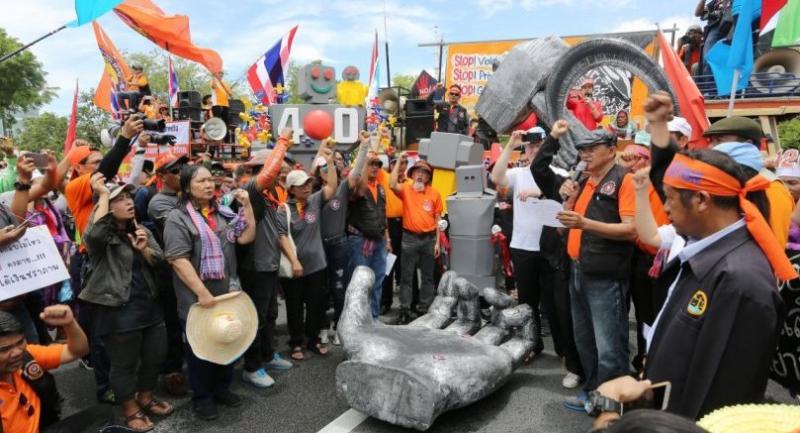 Thousands of labourers rally for Labour Day in Bangkok yesterday, calling on the government with a 10-point petition demanding better welfare as well as improvements in their working and living conditions.

AS WORKERS took part in Labour Day events across Thailand yesterday, labour rights groups stressed that unjust employment and the depletion of employees’ power was undermining the well-being of the Thai workforce. Prime Minister General Prayut Chan-o-cha yesterday promised to improve conditions for workers nationwide and said the government has already raised the minimum wage up to 5 per cent as a May Day gift to all Thai labourers.

But unionists said labour rights violations were not yet solved and the “totalitarian” administration installed by National Council for Peace and Order (NCPO) was making the problem worse. The Labour Congress of Thailand and the Textile Industry and Leatherworks’ union jointly released a statement yesterday urging the junta to return power to the people by stepping down and holding the election this year. This would improve the livelihood of workers and make a better society for all citizens on the principles of liberty, equality, fraternity and human rights.

The joint statement insisted that the sovereignty must belong to the people and ordered the NCPO to hand power back to the people concerning politics, economics and culture.

On politics, the labour groups called for the election within this year, revocation of all NCPO orders, a guarantee of the right for the workers to cast a ballot at their workplace, and cancellation of the social security pension policy amendment.

On economics, there were demands on the enforcement of progressive tax collection and an assurance of a proper wage structure for all workers.

On the cultural aspect, the unions pressed for reforms in the education system, free education for all, adequate state welfare and the establishment of social security specialised hospitals. Four labour rights defenders were taken into police custody yesterday without charge during the peaceful demonstration at the United States Embassy in Bangkok. They were seeking mitigation measures on labour rights violations against workers of General Motors (GM) Thailand.

They were arrested after police claimed that they were no longer permitted to take part in the public gathering, although Boonyuen informed officers that the group had notified authorities two days in advance as per the legal requirement for arranging a peaceful demonstration. As well, the group had advised the embassy of their plans. Boonyuen said police took them to Lumpini Police Station for interrogation and checked their criminal records. They were all later released without charge.

Around 70 members of GM Thailand Workers Union participated in the march to the US embassy on Wireless Road. They intended to submit petitions to the US government and General Motors Company Head Office to ask for help on what they described as the unjust treatment of 116 GM Thailand’s workers.

Police initially did not allow marchers to walk to the embassy and only allowed three representatives of the union to enter the embassy to submit their petition. Boonyuen said protesters were eventually allowed to gather in front of the embassy and representatives allowed to hand over their petition.

“We asked the US government to closely monitor the investment from their country in Thailand, investigate the labour rights violations by General Motors’ subsidiaries, ensure compliance with ILO Conventions, and forward our petition to General Motors headquarters in America,” Boonyuen said.

He said that there was still no protection for workers against lock-out measures, unjust lay-offs, and unfair treatment at work.

Meanwhile, Prayut proclaimed his love to all workers and stated that the government has given a bigger May Day present than previous years to workers nationwide, with an improved minimum wage and adjustments to social security and retirement systems.

“Please be patient. Labour is significant to develop the country. Labour is human capital which the government has paid attention to,” Prayut said during his weekly press briefing.

“I love everyone. I understand your problems but we have to take it one step at a time and take investment, economy and other things into consideration,” he said.

He pointed out that due to the limited budget, not all workers’ problems can be solved at once. He asked workers to understand the situation that the government faced, as the country also has to compete with other nations to attract investors by providing tax benefits and ensuring a low minimum wage.