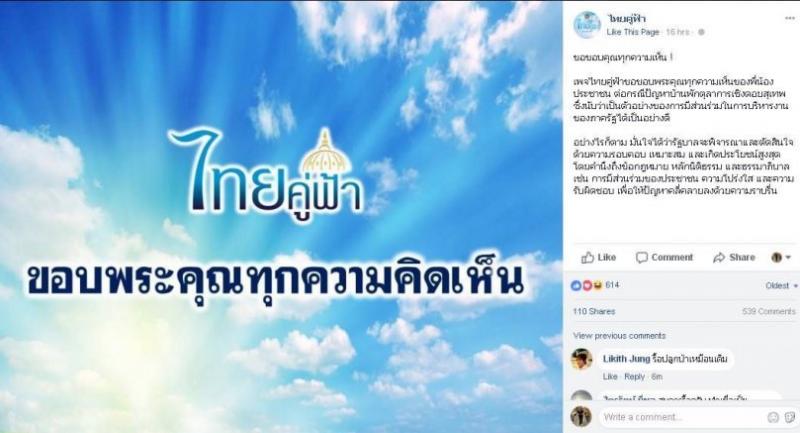 Social media users responding to a government survey are almost universally in favour of demolishing the residences built for judges on Doi Suthep in Chiang Mai and letting the forest grow back.

As of press time Wednesday, the survey asking for “one comment about the solution to the problem of justice officials’ housing project” had drawn more than 18,000 responses.

The survey is posted on the Facebook page of the Government Spokesman Bureau, @ThaigovSpokesman.

More than 6,000 Facebook users shared the post within 24 hours of its appearance on Tuesday just before noon.

Prime Minister Prayut Chan-o-cha had pointed out earlier that the judges’ residential estate had been established in accordance with the law, but the government was concerned that it had caused a public outcry and wanted citizens to suggest a solution.

The resulting opinion poll on Facebook insists that only one comment be posted and it must not be offensive, defamatory or seek to politicise the issue.

Most of the comments agree with the stance of the network formed to oppose the housing estate – that all buildings erected beyond the former forest line be demolished – but some respondents side with the government, wanting the project left as is.

The majority see the project as visual pollution, an invasion of a “sacred” mountain, destruction of pristine headwater forest and an unreasonable expenditure for such an obscure use.

“We should entirely demolish it and not regret the money already spent, because we need to rebuild the foundations of our society,” a Facebook user posting as Seree Pansang commented. “If the authorities need official residences for judges, they should not be so luxurious.”

“Amornsak Kit” said the authorities, especially Court of Justice officials, should be role models for others when it comes to protecting the environment and remove all structures that encroached on the forest, which is an important “lung” allowing residents of Chiang Mai to breathe clean air.

“Ente Vogel” was among posters urging the government to let the buildings stand because so much money had been invested, but to turn the site over to the public to use.

“Hamich Teenrabirt” said razing the buildings and restoring the forest would be a further huge expense and waste the money already invested. He suggested letting the project stand but making it less visually obtrusive by planting more trees among the buildings.