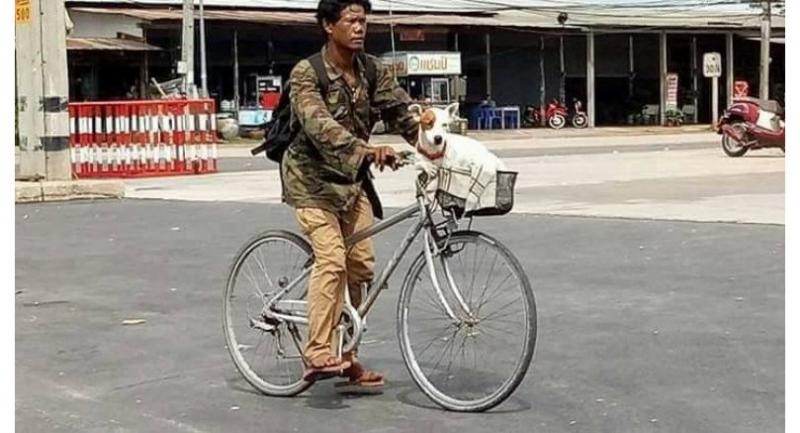 A homesick Chaiyaphum man was spotted cycling home from Sattahip in Chon Buri with his pet dog.

In a viral video clip and Facebook post by a reporter in Prachin Buri, Kaen Homsanthia, 39, is seen riding his bicycle on the Kabin Buri-Pak Thong Chai road in Prachin Buri on Wednesday with his pet dog sitting in the bike’s front basket. The reporter, Thongsuk Singpim, shared the photos of Kaen and the video clip on his Facebook wall at 9.30 on Wednesday night and by 9.10 Thursday morning the clip has been viewed more than 651,900 times. The post telling Kaen’s story and including photos was shared more than 3,500 times and received some 1,100 comments plus 3,100 likes and other reactions.

According to Thongsuk, Kaen decided to ride the 500-odd kilometres home to Chaiyaphum’s None Sanga district because he missed his parents and his village. He left Sattahip on the night of April 30.

Kaen has been working in Sattahip district for more than two years and lived with his girlfriend who is disabled.

Kaen told Thongsuk he had intended to put off the journey until he had saved between Bt1,000 and Bt2,000 and the couple could travel together on the bus but he could no longer wait.

He said he stayed overnight at bus shelters along the road and lived on food and water from temples or handouts.

He insisted that he had not abandoned his girlfriend but intended to work as a farm hand for a month then travel to Chon Buri to collect her.

After his story was widely shared, public support including donations and food poured in.

His relatives in Chaiyaphum later learned of his journey, and sent a pickup truck to pick him up on Thursday morning.