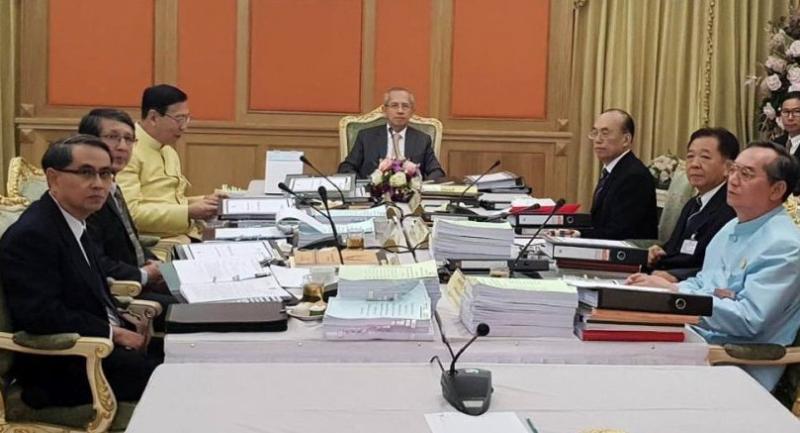 NEW ELECTION commissioners who will take charge of holding the next national vote are expected to be in place by July after the National Legislative Assembly votes on ratifying on the five finalists chosen by the selection committee yesterday.

Of the five, two are former provincial governors, two are department directors, and one is a university professor. All are said to have taken a low profile politically and are making their political debuts as applicants for the Election Commission (EC) member positions.

The successful candidates who made the cut yesterday are: Suntud Sirianuntapiboon, an environmental technology professor from King Mongkut’s University of Technology Thonburi; Somchai Charnnarongkul, former director of the Cooperative Promotion Department of the Ministry of Agriculture and Cooperatives; Ittiporn Boonpracong, former director of the Treaties and Legal Affairs Department of the Ministry of Foreign Affairs; former Buri Ram governor Peerasak Hinmuangkao; and former Saraburi governor Tawatchai Terdphaothai.

The finalists were selected from 24 applicants who had passed the first round of qualification checks. They yesterday underwent an interview and outlined their visions as EC members. Thirty-three people had applied for the positions.

Seven vacant EC member seats need to filled after the new organic law governing the agency dismissed all previous commissioners. The selection committee selected five candidates for the National Legislative Assembly (NLA) to approve while a general meeting of Supreme Court judges selected two others, according to the law.

The selection was a second attempt after the NLA turned down all of the finalist candidates in February. The assembly had been vague as to why they rejected the candidates, but some sources said it had been over the controversial selection of two candidates from among the Supreme Court judges. The rejection also stirred up much controversy. Critics said it was another tactic to try to put off the next election which the Premier has promised will be held by next February. But authorities remained firm that the caretaker election commissioners could perform the task if needed and that the election road map was unaffected.

Last week, a general meeting of the Supreme Court attended by its 176 judges selected their senior colleagues Chatchai Chanpraisri and Pakorn Mahannop as the court’s EC candidates, the same candidates rejected by the assembly in February.