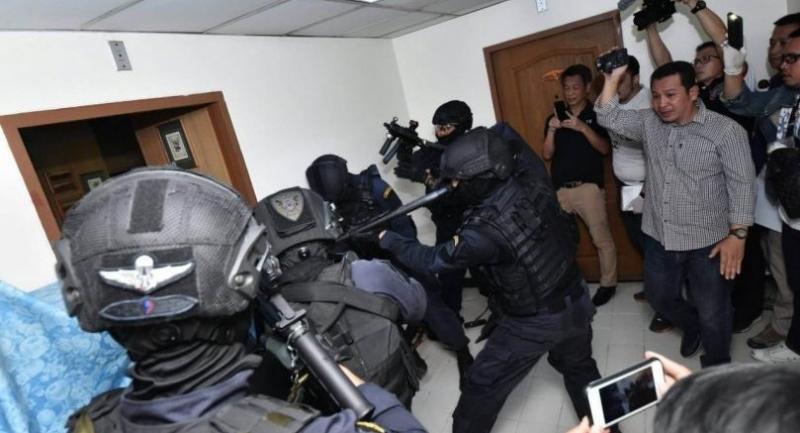 Santhana, whose condominium unit in Soi Phaholyothin 8 was searched by a SWAT team and other police officers yesterday afternoon as per a court-approved search warrant, insisted he would surrender at Don Muang Police Station today.

Dismissing rumours he had fled, the adviser to the operator of Donmuang Modern Market said he was pre-occupied upcountry as of press time.

Tourist Police deputy commander Pol Maj-General Surachet Hakpan led the search of the condo, which involved breaking down the door, in search of evidence.

Surachet said that 10 of Santhana’s alleged accomplices also faced arrest warrants. “We are taking actions against a gang that allegedly extorted money from vendors at the market on various occasions,” he said, adding that the extortionists also resorted to destroying people’s properties to threaten them to pay up.

“We have already interviewed more than 200 vendors,” he said. If the investigation found additional individuals involved, arrest warrants would be issued for them accordingly, Surachet said. Police were contacting the Anti-Money Laundering Office to probe money transactions involving the suspects, as extortion is an offence under the anti-money laundering law. “Thailand must have no Mafia-styled figures, no protection money or extortion,” he said.

Earlier this month, Santhana confronted a senior police officer who had led a team to search the market on suspicion that some shops were selling sub-standard products.

Chakthip said police would fairly and carefully probe the market and the alleged offences including extortion by “dark” influential figures.

He said the case against Santhana would be as per the law and course of justice.

Chakthip also said that Weerachai would still be in charge of the separate police investigation of Magic Skin Co’s alleged sub-standard products.