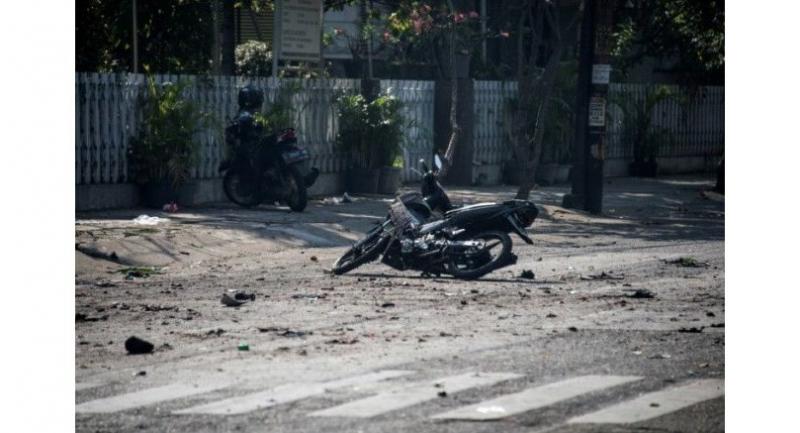 A wave of blasts including a suicide bombing struck outside churches in Indonesia on Sunday, killing at least six and wounding dozens of others, police said, the latest assault on a religious minority in the world's biggest Muslim-majority country.

Three separate locations in the city of Surabaya were hit by the bombings around 7:30 am (0030 GMT), which left at least 35 injured. No one has yet claimed responsibility.

Images from one scene showed a body lying outside the gate of Santa Maria catholic church and members of Indonesia's bomb squad poring over the rubble.

"Six people are dead and 35 are in hospital," East Java Police spokesman Frans Barung Mangera said, adding that two police officers were among the injured.

At least one of the attackers was killed when they detonated their bomb at Santa Maria. It was not clear if any other perpetrators were killed or injured.

The attacks come several days after five Indonesian police officers and an inmate were killed in clashes at a high-security jail on the outskirts of Jakarta.

The Islamic State (IS) group claimed responsibility for that incident although police rejected its involvement.

The Southeast Asian nation's 260 million people includes significant numbers of Christians, Hindus and Buddhists but there are concerns over rising intolerance.

Indonesian police shot and wounded a man who attacked a church congregation in the town of Sleman with a sword during a Sunday mass in February.

The radical Islamist, who had wanted to fight with the Islamic State group in Syria, injured four people.

Indonesia, which will begin the holy fasting month Ramadan this week, has been on high alert after a string of recent plots and attacks by militants inspired by IS.

The archipelago nation of some 17,000 islands has long struggled with Islamic militancy and has suffered a series of attacks in the past 15 years -- including the 2002 Bali bombings that killed 202 people, mostly foreign tourists, in the country's worst-ever terror attack.

A sustained crackdown weakened the most dangerous networks but the emergence of IS has proved a potent new rallying cry for radicals.

Hundreds of Indonesians have flocked to fight with IS, sparking fears that extremist outfits could get a new lease on life.

A gun and suicide attack in the capital Jakarta left four attackers and four civilians dead in January 2016, and was the first assault claimed by IS in Southeast Asia.

The attack on a district packed with malls, embassies and United Nations offices left around 20 others injured.

Previous incidents have included a 2004 suicide car bomb that killed 10 outside the Australian embassy in Jakarta, twin bomb blasts that killed 22 in a market in the Central Sulawesi town of Tentena, and a suicide bombing in 2005 that left 20 dead in Bali.

Seven people were killed, six of them foreigners, and more than 40 were injured when suicide bombers targeted the luxury Ritz-Carlton and JW Marriott hotels in Jakarta in July 2009.