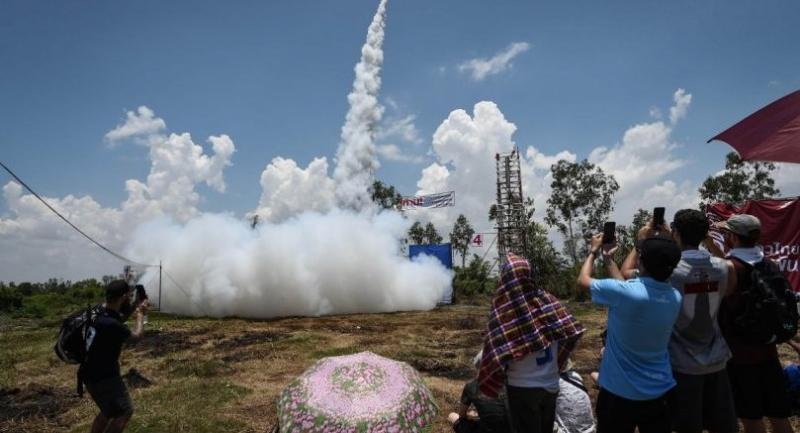 People watch as participants launch homemade rockets at the “Bun Bang Fai” festival in Yasothon yesterday. The annual rocket festival celebrated in Thailand’s Isaan region aims to prod the gods to unleash rain ahead of the rice-farming season. AFP

THE NORTHEASTERN province of Yasothon’s “Bun Bang Fai” annual festival has wowed Thai and foreign tourists with nearly 100 beautifully-decorated traditional rockets, to be lit as an offering to the gods for rain along with a contest for cash prizes worth more than Bt60,000 being held at Phaya Thaen Park in Muang district.

Yasothon governor Nikorn Suksai presided over the festival’s official opening on Saturday by lighting the first rocket, which asks for predictable rainfall. The festival began on May 9 and ran through May 13.

Residents from Chichibu, for 24 years Yasothon’s sister city in Japan’s Saitama Prefecture, participated in the important festival as they have done in past years.

The festival’s events over the first three days included the display of rockets and a contest among cheering squads on Wednesday, a parade and contest featuring beautiful rockets on Thursday, and a rocket launching contest in search of the rocket that could stay aloft for the longest time.

The “Bun Bang Fai” annual festivals are organised during this period in north-eastern provinces including Yasothon, Si Sa Ket, Nakhon Ratchasima, Kalasin, Roi Et, Nong Khai, and Udon Thani as well as in the neighbouring country of Laos. It is based on a folktale about Phraya Thaen who oversees rain-making and is fond of fire - hence the building of "fire rockets" to please him.