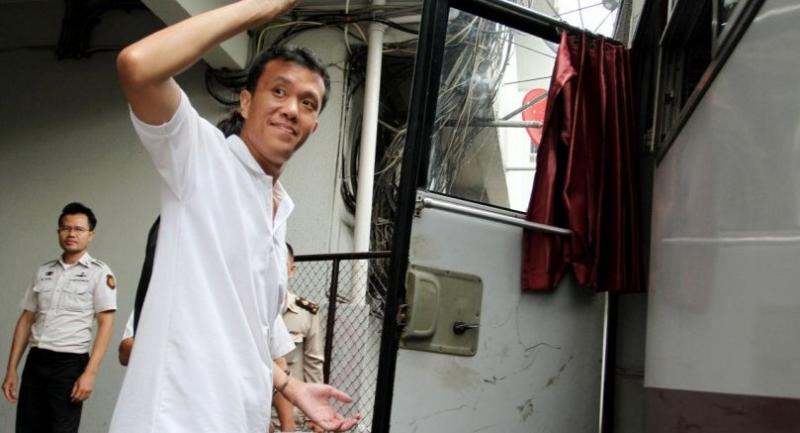 THE CRIMINAL Court yesterday ordered that Ekachai Hongkangwan be detained for 12 days following charges over his alleged involvement with pro-democracy, anti-junta activism months ago.

This makes Ekachai the only one of 57 activists detained after having joined a March 24 assembly that marched to the Army headquarters and urged the military to stop supporting the ruling junta. It was one of a series of assemblies demanding that an election be called this year.

Ten participants, including Ekachai, were deemed key actors by the authorities. The remaining nine activists reported to police earlier and were also taken to court, only to have the prosecutor’s detention requests refused.

Ekachai was immediately detained yesterday, as he chose to not request bail in line with his approach that from the start has denied the legitimacy of the charges.

This approach is also why he did not report to police when they pressed charges, and subsequently caused him to be labelled a fugitive and arrested on Friday at his home in Lat Phrao district.

“A developed country will not recognise the junta’s order as law,” Ekachai said, smiling and raising three fingers as a defiant symbol before going into the court. The charges dating from March 30 are sedition under the Criminal Code’s Article 116, violating the junta’s ban against a political gathering of five or more people, violating laws relating to public assembly, land traffic and advertising by loudspeaker.

The Thai Lawyers for Human Rights group, however, is expecting to contact him and make a request for his bail tomorrow, activist Nuttaa Mahtaana told The Nation.

Ekachai is also known for his acts of resistance, for example trying to hand his inexpensive watch to Deputy PM and Defence Minister General Prawit Wongsuwan, who is being investigated over his possession of a multi-million-baht collection of luxury watches.

In an effort to hand his watch to Prawit, Ekachai has been going to the General’s house and Government House almost weekly to light 36 incense sticks as a ritual to “shoo away all the bads”.

The activist believes that it was these actions that have caused him to be accused of sedition.