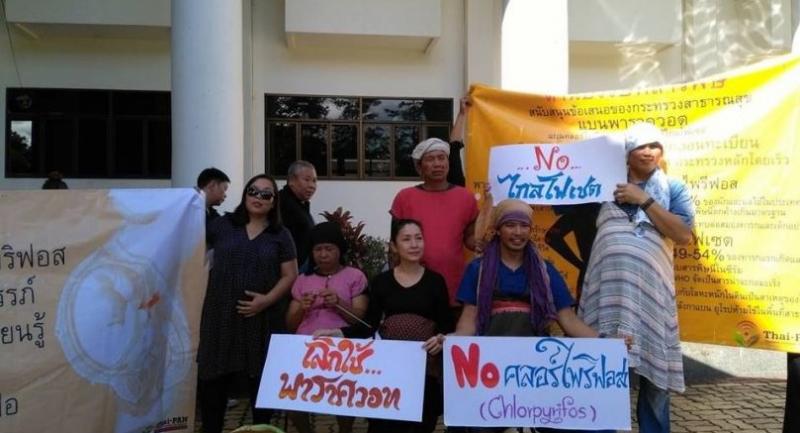 THE PERCENTAGE of farmers at risk of developing health problems from their farm chemicals has risen over the past few years, according to the results of a large-scale study.

“It’s up from 30.94 per cent in 2012 to 34.84 per cent in 2016,” Dr Chantana Padungtod said earlier this week, speaking in her capacity as the head of the Disease Control Department’s Bureau of Occupational and Environmental Diseases.

The 2016 monitoring operation conducted blood tests for 418,672 farmers across 72 provinces. Through interviews with the farmers, researchers were able to identify those at “high” or “quite high” risk. This group with was then subjected to blood tests.

“Of those tested, 153,905 were found to have risks of developing health issues,” she said.

The blood tests used reactive paper to determine if a farmer’s level of the enzyme cholinesterase had dropped. A person’s cholinesterase level will fall if herbicides such as organophosphate or carbamate have entered their body.

She urged farmers to avoid overusing herbicide and pesticides because they cause double damage – to their finances and then their health.

“Farmers will have to spend money for chemical purchases. Later on, they will also develop health problems from chemical exposure,” she said.

Chantana added that farmers’ exposure to harmful chemicals signalled that consumers might be affected too.

“Farm chemicals may contaminate crops as well as the environment,” she said.

Recent reports indicated that there was a high concentration of paraquat – a widely used herbicide – in Nong Bua Lamphu province and that it could be related to several cases of necrotising fasciitis, or “flesh-eating” disease, in the area.

The Hazardous Substance Control Committee will decide on whether to ban paraquat and chlorpyrifos, and to restrict the use of glyphosate at its meeting on May 23. Use of these chemicals is currently widespread in the country’s agricultural sector.

Chantana also noted that farmers face other health risks related to their occupation.

“For example, they are at risk of catching diseases that can be transmitted by animals, such as leptospirosis and bird flu,” she pointed out. As well, long exposure to hot weather can cause heat stroke, which is sometimes fatal. Also, farmers are vulnerable to developing back injuries and pain while working in fields.

Despite its romantic image, the history of stress-related illnesses in farming reflects its high level of financial stress from declining crop prices and poverty. “In serious cases, they may suffer depression and attempt suicide,” said Chantana.

The Disease Control Department has been supporting primary healthcare units and tambon-level hospitals in assessing farmers’ risks and recommending advice, she said.