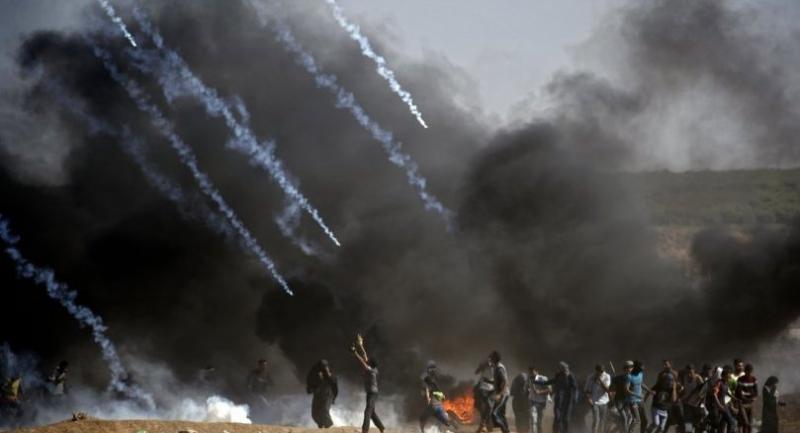 Tear gas is fired at protestors during clashes with Israeli forces near the border between the Gaza strip and Israel, east of Gaza City on May 14, 2018, following the the controversial move to Jerusalem of the United States embassy. /AFP

Israel faced widespread condemnation on Monday after its forces killed at least 55 Palestinians in Gaza during protests coinciding with the opening of the US embassy in Jerusalem.

Many countries including Britain, France and Russia had already slammed the US decision to move the embassy, while 128 nations have backed a UN resolution condemning Washington's recognition of Jerusalem as Israel's capital.

The US came to the defence of its ally Monday, blaming Hamas for the violence and blocking a resolution at the UN calling for an international investigation, according to diplomats.

Here are some of the reactions from around the world following Monday's violence:

The White House blamed the bloodiest day in the Israeli-Palestinian conflict in years on Hamas, the Islamist movement that runs the Gaza Strip.

Israeli Prime Minister Benjamin Netanyahu also blamed Hamas, and defended his country's use of force, saying "every country has the obligation to defend its borders".

Palestinian president Mahmud Abbas condemned Israeli "massacres", saying "the US is no longer a mediator in the Middle East," and that the new embassy was tantamount to "a new American settler outpost" in Jerusalem.

Hamas vowed the protests would continue. "We say clearly today to all the world that the peaceful march of our people lured the enemy into shedding more blood," senior Hamas official Khalil al-Hayya said.

Turkey announced it was recalling its ambassadors to the United States and Israel "for consultations".

"What Israel has done is a genocide."

UN chief Antonio Guterres said he was "particularly worried" about the developments.

"Dozens of Palestinians, including children, have been killed and hundreds injured from Israeli fire today, during ongoing mass protests near the Gaza fence. We expect all to act with utmost restraint to avoid further loss of life," Mogherini said in a statement.

French President Emmanuel Macron "condemned the violence of the Israeli armed forces against protesters" in a telephone conversation with Abbas and Jordan's King Abdullah II. He also reaffirmed criticism of the US decision to move the embassy to Jerusalem.

"The determination of the status of Jerusalem... must be decided through direct dialogue between with the Palestinians," he said.

Canada Foreign Minister Chrystia Freeland said it was "inexcusable that civilians, members of the media and children have been among the victims".

Kuwait requested an emergency meeting of the UN Security Council, which diplomats later said the US had blocked.

"We condemned what has happened," the Kuwaiti ambassador to the UN, Mansour al-Otaibi, said.

Egypt's foreign ministry called those killed "martyrs" and warned against "this serious escalation".

Ahmed al-Tayeb, the grand Imam of Al-Azhar, Egypt's highest institution of Sunni Islam, called on "Arabs and Muslims and all fair and reasonable people in the world to stand by the defenseless Palestinian people".

Iran decried "a day of great shame" over the deaths.