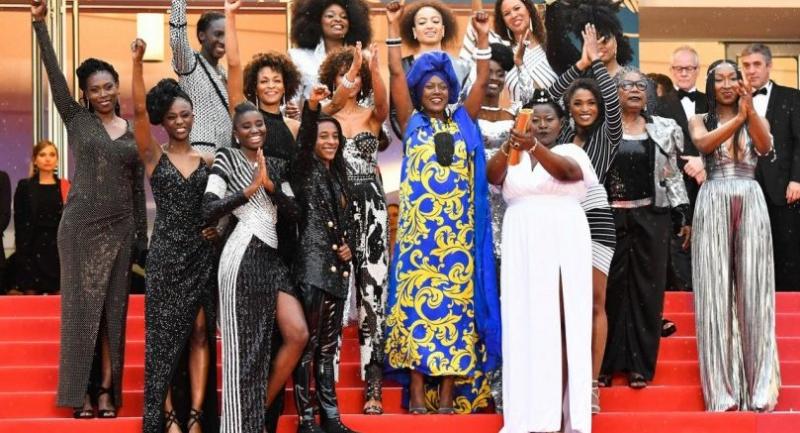 Burundian singer and member of the Feature Film Jury Khadja Nin, centre, poses with the 16 black women who fight for equality and inclusion of black women in the French film industry. AFP Photo

Led by "Bamako" star Aissa Maiga, they also launched their new book "Being black is not my job" ("Noire n'est pas mon metier"), denouncing the prejudice they have suffered from directors and casting agents.

But the heavens opened as they stepped out onto the red carpet from their cars wearing spectacular gowns by Balmain's mixed-race designer Olivier Rousteing.

"I was moved to act by the spirit of the times," Maiga told AFP, who said quotas "could be a possible option" for combatting the lack of black faces on screen, even if that would spark vehement opposition in France.

One of the actors who took part, Nadege Beausson-Diagne, said in the book that she had been asked if she spoke "African" at a casting.

She was also told, "You can't play her, she's a lawyer" and "Luckily you have fine features and you are not negroid, not too black..."

The actress, who appeared in France's biggest ever film at the box office, "Welcome to the Sticks" ("Bienvenue chez les Ch'tis"), said she was also told she was "not African enough to be African" and that "for a black, you are really very intelligent. You should have been white."