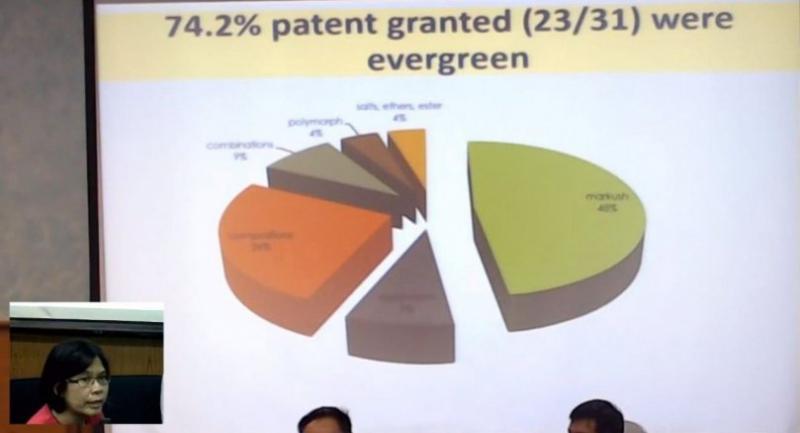 EFFORTS to claim monopoly privileges beyond periods that are normally allowed by law – or “evergreening” – have plagued Thailand’s patent registration system, according to research findings.

Aids Access Foundation’s representative Chalermsak Kittitrakul has estimated that evergreening had already caused more than Bt8.5 billion in damage to Thailand over the past two decades.

He was speaking at a recent academic seminar organised by the Thai Drug Watch Centre to highlight Thailand’s need to come to grips with the problem of patent evergreening. Earlier this month, the Supreme Court ruled that Valsartan could no longer be patented after the original patent expires because the second patent involved just a manufacturing method that even pharmacy students knew about.

However, as the legal battle between the patent holder and a Thai firm dragged on for more than seven years, the damage done to the latter’s reputation during the battle were so serious that it had to sell its business to a foreign investor. “Original-drug manufacturers have widely used the evergreening tactic. They have sought patents for products that get some minor revamp, something that is not innovative enough to warrant patent protection,” Dr Usawadee Sutapuk, a researcher and lecturer at Payap University’s Faculty of Pharmacy, said at the same seminar.

“This means 70 per cent of the patents should have not been granted,” she emphasised.

In Usawadee’s opinion, the evergreening problem and the Intellectual Property Department’s workload would be reduced if major changes were made to the patent-review process. “With evergreening of patents, drugs are very expensive,” she said.

Yupadee hoped the Intellectual Property Department would strictly screen patent requests based on its manual.

“I used to issue an opinion opposing a patent request before. But I could not know whether the Intellectual Property Department had taken my opinion into account,” she said. Peeracha Thanawattanawanich, a representative of Siam Pharmaceutical Co Ltd, said she hoped the patent database would be up to date and easier to use.

“Today, it’s like generic-drug manufacturers have to search relevant information all on their own,” he said.

He said the Intellectual Property Department should also provide counselling services and access to experts, so that Thai entrepreneurs could avoid any patent problems.

Kannikar Kijtiwatchakul, an independent researcher and a vice president of the FTA Watch, earlier said that not many Thai firms had the courage to fight a legal battle with big multinational firms.

According to her, multinational firms have sued at least three Thai firms over drug manufacturing.

The first case involved Valsartan, which is used to treat blood pressure and a congestive heart. In this case, the Supreme Court ruled in favour of the Thai firm on May 9 and ordered the patent held by Novartis cancelled.

Another case surrounded Finasterine, a medication used mainly to treat an enlarged prostate or scalp hair loss in men. Neither the multinational firm nor the Thai firm in the case lost their case. Two years ago, the Supreme Court ruled that these two firms used different manufacturing techniques.

In the third case, Pfizer had sued MacroPhar, accusing the latter of violating its patent on Celecoxib – a non-steroid anti-inflammatory. This case is still pending in court.

Kannikar said a network of patients had also protested against a request by a firm to patent combined sofosbuvir and ledipasvir (a treatment for Hepatitis C).