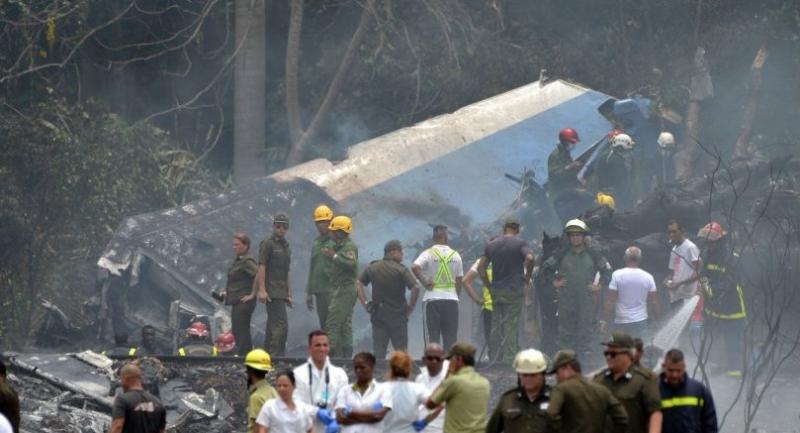 Emergency personnel work at the site of the accident after a Cubana de Aviacion aircraft crashed after taking off from Havana's Jose Marti airport on May 18, 2018./AFP

A Cuban state airways plane with 110 passengers and crew on board crashed shortly after taking off from Havana Friday, leaving a mass of twisted and smoldering fuselage, as the country's president warned many people were feared dead.

Cuban state media reported that three people had been pulled alive from the mangled wreckage and were in critical condition in hospital.

There was no other official mention of survivors from a nearly 40-year-old Boeing 737 operated by Cubana de Aviacion, which crashed into a field close to a wooded area near Havana's Jose Marti airport, sending a thick column of acrid smoke into the air.

The 110 aboard included six Mexican crew, said Aerolineas Damojh, the Mexican-based company that leased the plane to the Cuban carrier.

The plane -- carrying 104 passengers -- was almost completely destroyed in the crash and subsequent fire, which was put out by firefighters who raced to the scene along with a fleet of ambulances.

Emergency personnel combed through the wreckage, lending little hope that there could be other survivors.

"Three passengers managed to survive the accident. They are in a critical condition. They are already in hospital," the state newspaper Granma said.

What appeared to be one of the wings of the plane was wedged among scorched tree trunks, but the main fuselage was almost entirely destroyed.

Cuba's President Miguel Diaz-Canel, who went to visit the scene, told AFP there was a large number of casualties.

"There has been an unfortunate aviation accident. The news is not very promising -- it seems that there is a high number of victims," Diaz-Canel said.

The president said nine crew members were believed to have been on board, but he was unsure if they had been included in the total of 104 passengers.

The 58-year-old president, who succeeded Raul Castro as the island's leader only last month, appeared aghast as he surveyed the recovery efforts, wearing a short-sleeved green shirt and surrounded by officials.

In a statement later, the president said an investigation into the cause of the accident was underway.

"The bodies are being identified. The ministry of transport has set up a commission to investigate the facts. We will gather all the relevant information and we will communicate that to the people as soon as we will get it," he said.

Mexico's government said the plane was built in 1979 and said it had a crew of five Mexicans -- the pilot, co-pilot, and three flight attendants.

However, in a later statement, Aerolineas Damojh said a maintenance technician was also on board.

Aerolineas Damojh, also known as Global Air, is a charter company formed in 1990 that had a fleet of three planes.

Mexico's ministry of communications and transportation said the plane had passed inspections in November last year.

From the supermarket where he works near the airport, Jose Luis, 49, said he could see the plane taking off before it banked and plunged to the ground.

"I saw it taking off. All of a sudden, it made a turn, and went down. We were all amazed," he said.

Images from Cuban television showed rescue workers at the scene removing what appeared to be a survivor on a stretcher as rain began to fall.

Prior to Friday's crash, Cuba's most recent air accident occurred in April, 2017. Eight military personnel died when a Russian-made AN-26 transport aircraft went down in western Cuba.

The country's last major airline disaster was in November 2010 when a Cuban Aerocaribbean airliner crashed while on a flight from Santiago de Cuba to Havana, killing all 68 people on board, including 28 foreigners.

In July 1997, an Antonov-24 passenger plane crashed into the sea off Santiago de Cuba. All 44 aboard were killed, including two Brazilians and two Spaniards.

In March 2002, a small Antonov-2 plane travelling from Cienfuegos to Cayo Coco crashed in the central province of Santa Clara. All 16 people aboard, among them six Canadian tourists, four Britons and two Germans, were killed.