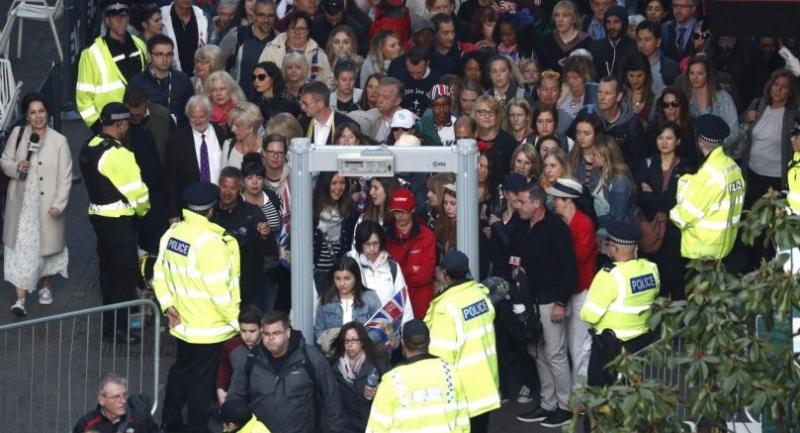 Members of the public pass a security screening as they arrive on castle hill ahead of the wedding and carriage procession of Britain's Prince Harry and Meghan Markle in Windsor, on May 19, 2018. / AFP PHOTO / Odd ANDERSEN

Hardy campers and early risers turned the town of Windsor into a sea of red, white and blue on Saturday, bringing the carnival spirit ahead of the wedding of Prince Harry and Meghan Markle.

"It's like a fairytale" gasped one tourist as the first train from London pulled into the station -- rebranded as "Harry and Meghan Central" for the day -- in the shadow of Windsor Castle, where the wedding will take place.

Throngs stepping off the train under cloudless skies were met by armed police, sniffer dogs and airport-style security scanners before hitting a wall of thousands of royal fanatics lining the procession route, many of whom had braved the cold and camped overnight.

"It was so cold last night, I've not had one wink of sleep, but nobody gave up," pensioner Maureen Hayward, who arrived on Friday afternoon to stake out a spot, told AFP.

"It was good, it was cold, but we all had a few drinks, tried to have a sleep but couldn't," said Pippa Natschall, who had travelled from Australia for the event.

"There's only one toilet in the village, which was worse, there was a big line," added the 46-year-old, who had marked out her camp with Union Jack flags.

Red, white and blue bunting festooned the quaint streets, with people dressing up for the special day.

Two Canadians wore maple leaf onesies, one man dressed as Mr. Bean was entertaining the crowds while others were dressed from head to foot in the British and American flags as a town crier barked out a congratulatory message.

The party started early for bleary-eyed fans on the first train from London's Paddington station as crowds packed onto the platform, although in true British tradition, the trip was delayed on departure.

"I woke up at four in the morning when I was 12 to watch Princess Diana get married and I've been hooked ever since," Heather Miller, 49, from Colorado, told AFP as she waited for the train, wearing a Harry and Meghan t-shirt and a fascinator.

She was accompanied by friend Karen Wallace, 53, originally from Chicago, and Miller's reluctant husband.

"After the week she's had she needs some support," she added.

"I think her half-siblings are so jealous -- they want their 15 minutes of fame."

The wedding plans were thrown into disarray on Thursday when it was confirmed that Markle's father Thomas would not attend due to health problems after becoming caught up in a paparazzi fiasco.

Her half-siblings also caused a stir with unflattering comments about the bride-to-be.

The crowd in Windsor was expected to swell to around 100,000, with at least 5,000 journalists, according to Thames Valley Police.

Some of the most fanatical supporters camped for days, watching as the security forces moved in to turn the picturesque town into an impregnable fortress.

Huge barriers have been hauled into place to prevent a vehicle attack and many roads are now closed in the town of 30,000 inhabitants, 30 kilometres (19 miles) west of London.

Snipers have also taken up positions on roofs.

Early arrivers got a taste of the drama on Thursday, when Meghan and Harry arrived for a dress rehearsal, with the couple making a brief appearance, surprising crowds milling around the rehearsal route by pulling in to Windsor Castle via the famous Long Walk promenade.

Retired nurse Cynthia Osborne travelled from her home in Cardiff, Wales to catch the train, wearing an array of Union Jack branded clothing and a Welsh dragon hat.

As she waited for the train, an American visitor asked her for a photograph.

"I think they're a little bit envious of us, not just the Americans but the Europeans too," she said.

"I think this brings people together."

The circus arriving in town was also good news for local retailers, many of whom had set up tables outside their shops, covered with Union Jack towels and flags, and Harry and Meghan t-shirts.

"It's going to be a lovely day, but I don't think I'll be able to retire" on the profits, joked shopkeeper Irshan, who had entered the party spirit with a Union Jack turban.