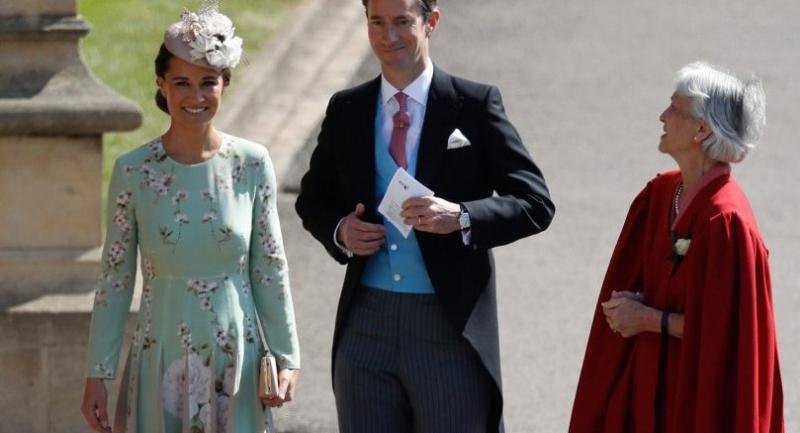 Pippa Middleton (L) and her husband James Matthews (2L) arrive for the wedding ceremony of Britain's Prince Harry, Duke of Sussex and US actress Meghan Markle at St George's Chapel, Windsor Castle, in Windsor, on May 19, 2018. / AFP PHOTO /

Crowds of colourful royal enthusiasts from around the world flocked to Windsor on Saturday, turning the historic British town into a sea of red, white and blue ahead of the wedding of Prince Harry and Meghan Markle.

People from as far afield as Canada, Australia and the Philippines brought an international flavour to the scene, as the hordes awaited the nuptials of the royal couple in St George's Chapel in Windsor Castle.

Karen Long, from the US state of Texas, felt compelled to come to Britain for the big occasion given Markle's American nationality.

"I feel like she is one of us!" she told AFP. "We all wanted to be a princess, we thought we couldn't and there she is, breaking all the barriers."

Two Canadians wore maple leaf onesies, one man dressed as Mr. Bean was entertaining the crowds while others were clad from head to foot in the British and American flags as a town crier barked out a congratulatory message.

"We have travelled a long way for a very, very exciting event," said Jessica Kirsopp, a 31-year-old child care worker from Australia, keeping warm in the chilly early hours with whisky.

"It's something that is probably not going to happen for a little bit, until (Prince) George gets married or there's another coronation."

Police expected the crowds to swell to around 100,000 people.

Some of the most fanatical supporters camped for days, watching as the security forces moved in to turn the picturesque town into a fortress.

Armed police, sniffer dogs and airport-style security scanners are deployed throughout, while huge barriers have been hauled into place to prevent a vehicle attack.

Many roads have been closed in Windsor, which has a population of 30,000 inhabitants, and is 30 kilometres (19 miles) west of London.

Police patrolling the parade route Saturday were applauded by crowds, as snipers took up positions on numerous roofs.

Adele McNally, 67, one of the "royal ambassadors", volunteers drawn from the local community to assist spectators, said she was happy to miss out on seeing the ceremony and procession in order to help.

"Being a part of it will be lovely," she said. "It's what being British is all about."

Bunting in red, white and blue -- the colours of Britain's Union Jack national flag -- festooned the streets, with many people dressing up for the special day.

News that Markle will walk down part of the aisle solo in a purported feminist statement was applauded by some.

"I think that shows she is a strong independent woman and it puts (a) great message across," said student Mary Grimes, 19.

Windsor's 150-strong Rock Choir entertained the crowds with a musical medley, as flag and souvenir sellers did a roaring trade.

Prosecco appeared to be the drink of choice among spectators, with hardy campers and early risers bringing a carnival spirit to the historic market town as day broke.

By then die-hard royalists had bagged all of the prime front row positions on the famous Long Walk promenade -- where the newlyweds will pass by in an open-top carriage after the ceremony.

"I know it is going to sound very creepy but I would love to touch them -- just shake their hand," said Kristen Henry, 34, a radio host who had travelled from Australia.

Thousands had packed trains from 5:00 am for the short ride from London, arriving under cloudless skies.

"It's like a fairytale," gasped one tourist aboard the first train from London as it pulled into the station -- rebranded as "Harry and Meghan Central" for the day -- in the shadow of Windsor Castle, where the wedding will take place.

"It was so cold last night, I've not had one wink of sleep, but nobody gave up," said pensioner Maureen Hayward, who spent the night under the stars for a front-row seat.

Tags:
global royalists Windsor wedding One of One of us