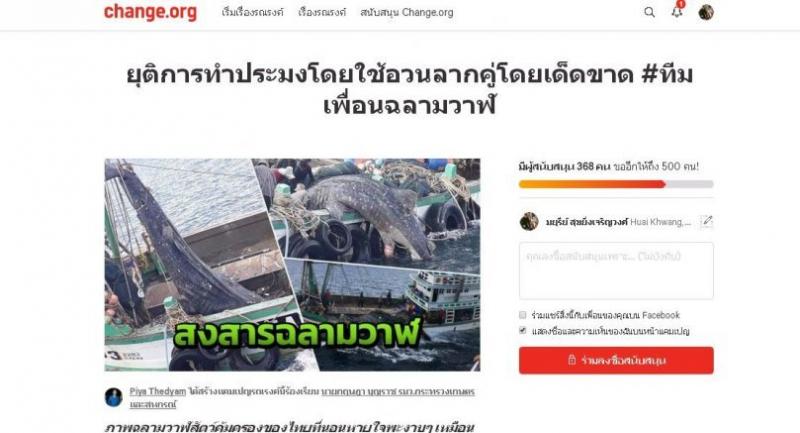 AN ONLINE petition campaigning for a ban on a form of fishing was launched yesterday after an endangered whale shark was caught by a trawler in the waters off Phuket last Friday.

Piya Thedyam, creator of the campaign on Change.org for ending the use of so-called otter trawls, emphasised that the marine ecosystem, biodiversity and seafood sustainability of Thai seas were in great danger as long as this destructive fishing equipment was still allowed to operate in Thai waters.

For these reasons, Piya started seeking signatures for the online petition to Agriculture and Cooperatives Minister Grisada Boonrach in an effort to preserve the marine ecosystem, ensure the survival of rare aquatic animal species, and promote sustainable fishing, as the otter-trawlers had just proven the harm they were doing to marine life by snaring the whale shark in their nets off the coast of Phuket.

“I would like to use the case of this whale shark to motivate the fishermen, seafood lovers, and all people to show solidarity in protecting our beloved oceans, marine animals and our sources of seafood by signing the petition to criminalise [otter] trawling and come up with high penalties for using this destructive fishing equipment,” he said.

“If we still allow these trawlers to operate freely in the sea, we may witness rare aquatic animals such as whale sharks or sea turtles become the next victims, while the very fine net of the trawls will scoop up anything in their path, including juvenile fish, cutting down the reproduction cycle, until there are no fish left for us in the sea,” he added.

The petition is open for signatures at http://change.org/whaleshark.