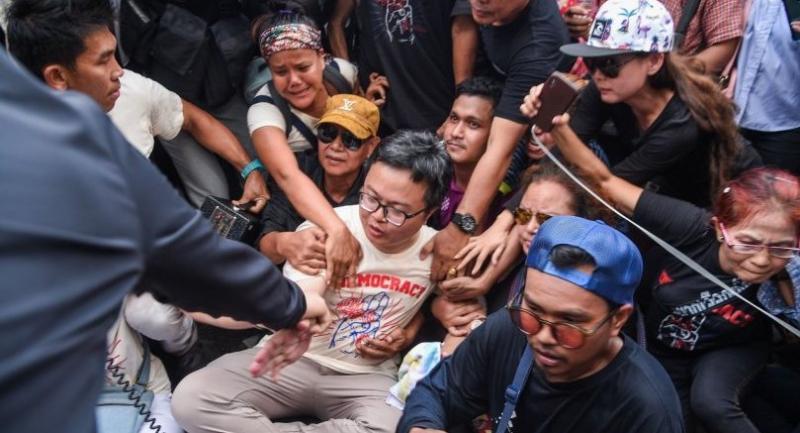 Thammasat University on Wednesday said that, despite the police’s suggestion, it would not pursue legal cases against pro-democracy protesters for breaking the university’s gate key.

“The university considers that the incident was caused by the chaotic situation. The damage was also minor,” the university said in a statement. “We would not pursue cases against students and activists but would instead try to communicate with them more.”

The statement referred to Tuesday’s 500-people assembly that attempted to march from the university’s Tha Prachan campus to Government House to demand the junta hold an election this year.

The rally ended unsuccessfully with key activists turning themselves into the police as they faced pressed charges for breaking the junta’s ban on political gathering of five or more.

The so-called Student Friend Network also issued a statement urging the government to unconditionally release all students and stop prosecuting cases related to peaceful assemblies and expressions of discontent.

“We call the officers to stop harassing wellbeing in every form of students and the people. We also call for the state to respect and protect people’s rights and freedom to prevent any further harassment,” it said.

Student activists are known to have been tracked or approached by security officers either directly to themselves, to their families or places of study.

“We also believe that the assembly dispersal [on Tuesday] was excessive and severely infringes fundamental rights and freedom,” it said, referring to the authorities’ targeting of the key protesters.

The network is also collecting signatures from students nationwide to endorse the statement.