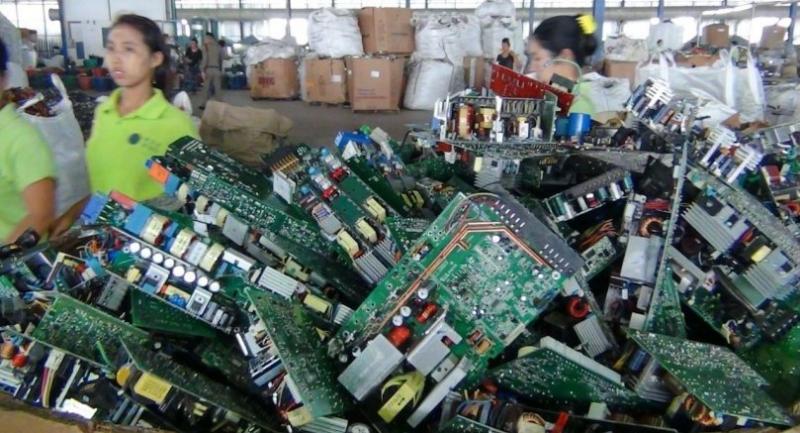 THE TRAIL of an illegal hazardous-waste smuggling network to Thailand by a group of Chinese investors has been exposed, after officers yesterday launched inspections at an electronic parts importing company accused of distributing imported hazardous electronic materials to waste management plants in Chachoengsao. Meanwhile, an environmental law expert said that a legal loophole in the Basel Convention banning transnational hazardous waste movements had been exploited by the network of smugglers, with the situation exacerbated by a lack of cooperation between responsible agencies.

At least up to 96 tonnes of environmentally harmful waste, including e-waste, has been carelessly disposed of in Thailand, the investigation found.

A team of police and officers from related agencies searched Virogreen (Thailand) Co Ltd in Lat Krabang Industrial Park, after officers found evidence in previous raids of other hazardous waste disposal plants that Virogreen had supplied them with electronic wastes. However, he said, tracing the movement of the of hazardous waste revealed a different story, with the imported electronic parts from Virogreen being disseminated to a network of electronic waste recycling plants and hazardous industrial waste disposal plants in Chachoengsao, rather than to the second-hand market.

“From these investigation findings, we are certain that these companies are linked in the hazardous waste smuggling network of foreign investors,” Weerachai said, “so this company has been charged with allegations of falsely declaring importing goods, importing-tax avoidance, and smuggling hazardous waste into the Kingdom.” The officers have found that three companies – OGI Co Ltd, GPL Metal Group International Co Ltd, and Virogreen – were responsible for importing electronic parts from various places around the globe and transferring them to the recycling company, WMD Thai Recycling Co Ltd. There parts suitable for reuse would be segregated, while the remainder of parts and toxic substances were disposed of by the lowest cost and improper methods at disposal plants.

Surapol Chamart, the Industry Ministry’s inspector-general, said that the electronic waste recycling plants in the network were licensed for managing electronic hazardous wastes in Thailand. Still, it was against the international convention to import hazardous waste into the country, and there would be further investigation into how the toxic waste had been allowed into the country. Environmental law expert Sonthi Kotchawat says he knows the answer Surapol’s question. Because Thailand ratified the Basel Convention on the Control of Transboundary Movements of Hazardous Wastes, bringing them into the country is forbidden, he said.

“However, the Basel Convention allows the importing of electronic parts for second-hand applications, so these companies take advantage of this exemption and falsely declare the environmentally harmful electronic waste as second-hand electronics to avoid the ban.”