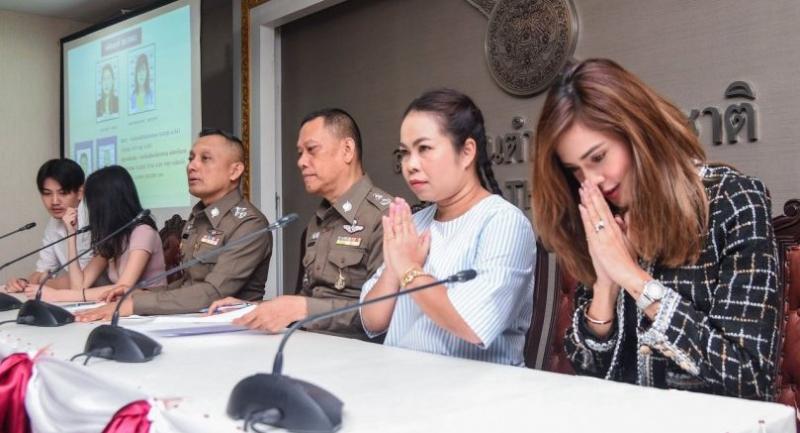 Four more celebrities linked to controversial Magic Skin products reported to police on Monday after being summoned, and insisted they had tried the products before giving “product reviews” used in advertising.

So far, 17 celebrities of the 37 summoned have testified to police over advertising for Magic Skin products, said national police deputy chief Pol General Weerachai Songmetta. Another 10 celebrities will soon be summoned over their product endorsements, he added.

Weerachai also said that police are now considering charges for manufacturing and distributing fake food products – punishable by a 10-year imprisonment – against Wannapa Puangson, 34, owner of Magic Skin, and her husband-accountant Korn Puangson, 37. Charges of violating around 10 laws are expected to be filed.

The foursome also apologised to the Thai public and vowed not to make the same mistake again.

Wanida said she had tested the product and checked its label in the general way that any other consumer would before submitting a “product review” advertisement. She was given a one-time payment for the job and no share of product sales.

She has also been implicated in a case regarding the controversial weight-loss product Kalow, which has been accused of containing the dangerous appetite suppressant sibutramine. Its manufacturer’s office was raided on May 21.

Wanida said she had done the Kalow product review ad a long time ago, and had read a script given to her about the product's properties.

Sudarat said the Magic Skin product review was her first job of its kind, and insisted she had tried the product beforehand. She said she would be more careful in future and warned the public about the dangers of some products.

Lukkana said that she, too, had tested the product before giving the review and apologised to the public for her act, which she said was a result of ignorance.

Pichaya admitted that the use of his celebrity status could affect the opinions of youths and the public, and so would in future be more responsible in his actions and ensure the accuracy of information he promoted to the public.