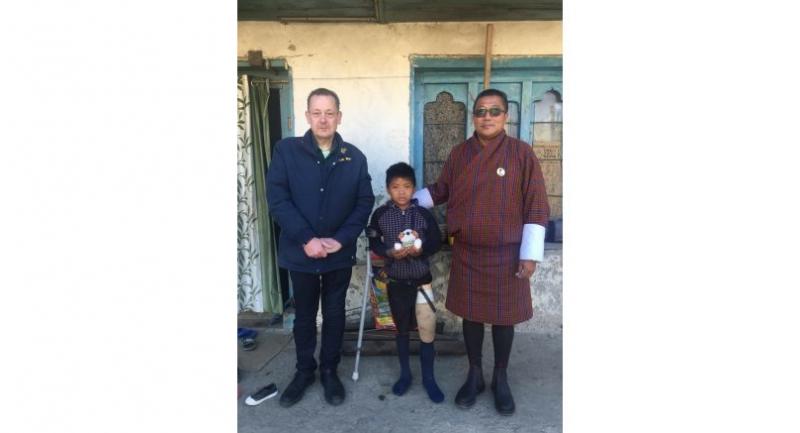 A nine-year-old Bhutanese boy, who lost his right leg in an accident about six years ago, is expected to undergo prosthesis surgery in Bangkok, Thailand next week.

With only four days left for a family in Khasadrapchu to send their nine-year-old son, who lost his right leg in an accident about six years ago, to Bangkok in Thailand for prosthesis, the parents are worried.

However, the boy, Tshering Penjor, is excited.

“He thinks the operation would be easy,” the mother said. “We are worried how it would go.”

Tshering lost his right leg after a truck ran over him when he was four years old. The accident occurred in Jigmeling, Sarpang, when returning home with his father.

Since then his parents had to shift to Thimphu, as he was hospitalised in Gidakom hospital, Thimphu. “After he was discharged from the hospital, we stayed nearby,” the mother said.

A year ago, a 56-year-old ground staff of KLM Airlines in the Netherlands, Ronald Stok, got in touch with Tshering’s family and proposed Tshering gets prosthesis.

Ronald Stok had already helped two Bhutanese avail prostheses in Bangkok by then.

His beneficiary, Rinchen Dorji, from a remote village in Zhemgang district had talked to Tshering and his family about Ronald Stok.

Ronald Stok said he met Rinchen through Facebook and when he visited Bhutan in 2016, he asked Rinchen to join him to visit Taktsang monastery in Paro.

“Rinchen said he cannot come because of his disability,” he said. “When I visited him, I found out he needed a prosthesis.”

He said he then looked for sponsors in Belgium and a catering crew, The Himalaya Club, owned by Didier Delanote sponsored Rinchen’s travel to Bangkok.

Rinchen Dorji, who studies in class X in Khasadrapchu Middle Secondary School, said the prosthesis has helped him a lot. “But I have been on a wheelchair since the beginning of this academic session,” he said. “My friends carry me when I have to go to the laboratories.”

A seven-year-old girl, Chimi, was also a beneficiary of Ronald Stok.

Ronald Stok said he is also trying to help a 22-year-old man from Gelephu who approached him for help. “He needs an urgent operation because of heart valve problem. I am trying to crowd fund.”

Meanwhile, he said Tshering Penjor would not travel alone on June 1. “There is a 29-year-old woman, Tshering Pemo, who also need prosthesis.”

By June 4, they will start their treatment and they are expected to be home by June 9. “We arranged wheelchairs for them,” Ronald Stok said. “Tshering Penjor will have a walking rack.”