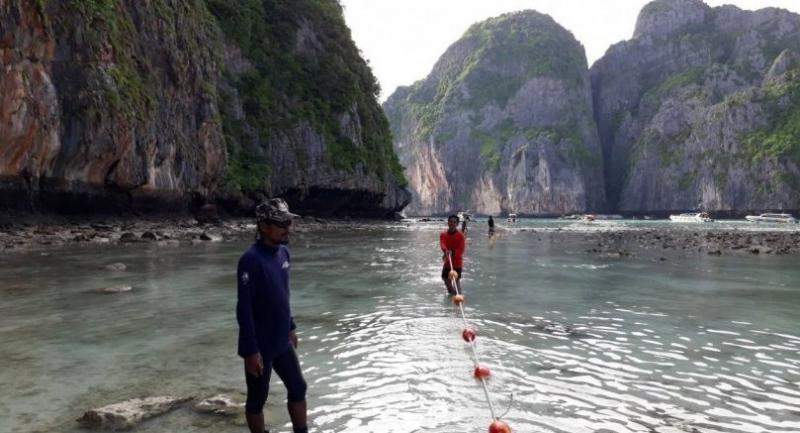 The decision to close Maya to pave the way for a major face-lift was made by the National Parks, Wildlife, and Plant Conservation Department in March. The department had consulted with the marine national parks advisory committee comprising a group of noted marine experts including Assistant Professor Thon Thamrongnawasawat, who is also a member of the national reform and strategy committees. The bay was made famous by the 2000 Hollywood film “The Beach” starring Leonardo DiCaprio, but it has been degraded by the excessive number of tourists – a daily average of about 4,000 people and 200 boats.

Following a recommendation by the experts, the department decided to make the bay off-limits from yesterday until September 30.

The closure is seen as an entry point for a new approach to tourism management at the park, and would also set a new standard for another 26 Thai marine parks that also bear a similar burden, according to the department. Since Thursday, the rangers have placed buoys extending hundreds of metres in front of the bay to close it off from tourist boat access, according to Songtham Suksawang, director of the department’s National Parks Office overseeing the operation.

“Maya today is very peaceful,” said Sontham, apparently with no tourist boats wandering around as they did in the recent past.

According to the department’s plan, access to Maya Bay will become permanently unattainable. It will be shifted instead to the back of the island, where a new aluminium and quality plastic-based pier and bridge will provide new access to the bay to reduce ecological impacts caused by tourists. Perhaps most importantly, the degraded ecosystems of the island will be rehabilitated, including the coral reefs in front of the bay.

Thon posted a message to his Facebook page, noting that Maya has been exploited for tens of years, with boats taking tourists in and out, crashing into and crushing coral reefs thousands of times. This caused the destruction of marine resources as tourists visiting paradise slowly pulverised the reef coral, smashing it over and over. The closure and rehabilitation today, he said, would draw tears of joy from many sea lovers as an end is called to the reef’s destruction.

“The sounds of the sea, the waves, the wind and the birds on this island paradise are like they were saying, ‘thank you all for giving the paradise a chance’,” wrote Thon.