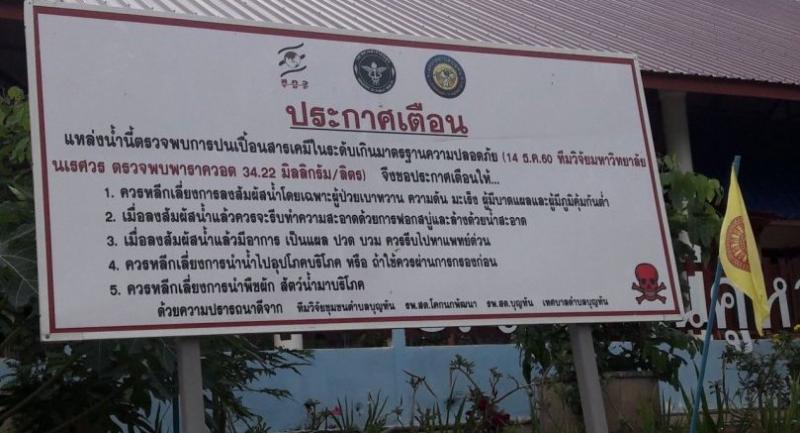 “I HAVE NOT heard frogs or bullfrogs croaking recently. And I can’t help wondering if all of them have already died from farm chemicals,” said Luang Phor Wichien, the abbot of Ban Klong Charoen Temple in Nong Bua Lamphu’s Suwannakhuha district.

He was speaking after a research team came to his monastery to study the effects of potentially harmful pesticides and herbicides. His temple sits next to a local dyke where the Boontan Municipality has erected a board warning people against swimming in the water or using it for their livestock.

Findings from the recent research suggest local farmers might have overused farm chemicals and polluted the environment in a dangerous way.

The size of that threat is indicated by a far higher rate of flesh-eating disease, necrotising fasciitis, in Nong Bua Lamphu than Thailand’s average. Abbot Luang Phor Wichien said he himself had developed rashes and wounds possibly because of farm chemicals, as he walks past sugarcane plantations every day to collect alms.

When researchers from Naresuan University collected water samples from the dyke next to his temple last year, up to 34.22 milligrams of paraquat was found in each litre.

Paraquat, a weedkiller, has been banned in many countries due to health concerns.

Nong Bua Lamphu authorities commissioned the 2017 research after high numbers of necrotising fasciitis and cellulitis cases were detected in the province. Associate Professor Puangrat Kajitvichyanukul from Naresuan University, one of the lead researchers, said downstream zones could suffer the most because contaminated water from farmland might flow to them.

After the 2017 research hinted at a link between paraquat and the illnesses, the Nong Bua Lamphu model was adopted as a new framework. The model covers a comprehensive research project featuring detailed study of the effects of farm chemicals, and promotion of organic farming as a solution running between now and 2021.

Wirun Khemphan, a 68-year-old resident in Tambon Boontan, now lives with a long scar on his left leg. The scar is proof that he has survived the flesh-eating disease that can cost victims their limbs.

“To help me survive without amputations, doctors have removed portions of my flesh,” he said, showing his wound. “Gauze had been stuffed inside for quite a while.”

Due to that experience, he no longer uses paraquat on his farm.

But he said his relatives continue to use paraquat to eradicate weeds.

Money is the reason, he explained. Paraquat costs a modest Bt6,000 to Bt7,000 a year to protect the average farm. To hire farmhands to get rid of the weeds would cost a lot more in labour wages.

Khemporn Kingthong, a 44-year-old farmer, said he regularly used paraquat and the herbicide glyphosate because they delivered fast results. “I know such chemicals are dangerous. But I feel like I have no other choices,” he said.

“Nothing works better than them at this point and at this price.”

Wachira Niamtha, kamnan of Tamboon Boontan, said he too had suffered at the hand of necrotising fasciitis.

“I don’t use weed killers. But probably water from nearby farmland gets mixed with water in my paddy fields,” he said.

To minimise the health risks, Wachira said he had set a rule that the chemicals were strictly barred in areas within 100 metres from houses, communities, temples, schools and clinics.

He said in other areas, users must erect warning signs when spraying is underway. Panjama Paenthamla, 45, has her wound cleaned at Tambon Khok Nok Pattana Hospital in Nong Bua Lamphu province, to minimise the risk of necrotising fasciitis spreading further. The flesheating disease can cause death or amputation in severe cases.

“They don’t wait anymore. When they see red rashes or swollen limbs, they quickly come. So there are no cases of amputation these days,” he said. Nong Bua Lamphu public health chief Dr Surapong Phadungviang said 59 local people were diagnosed with necrotising fasciitis in his province during the first five months of this year. So far, he said it remained inconclusive as to whether the adverse effects of farm chemicals had already reduced due to the growing public awareness of the danger involved.

“Last year, there were 254 cases of necrotising fasciitis in Nong Bua Lamphu. But the chemicals are usually used between May and |July.

“So we have to wait and see whether efforts to curb farm chemicals and their impacts are successful,” he said.

***This is the first in The Nation’s three-part series exploring the health hazards from farm chemical use in Nong Bua Lamphu province. The first report will focus on health issues, the second on the possible link between the government’s crop-choice policy and the increased use of potentially harmful pesticides and herbicides, and the third on organic farming that is touted as a sustainable solution.